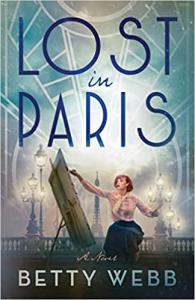 PARIS, 1922: Zoe Barlow knows the pain of loss. By the age of eighteen, she'd already lost her father to suicide, and her reputation to an ill-fated love affair?not to mention other losses, too devastating for words. Exiled from her home and her beloved younger sister by their stepmother, she was unceremoniously dumped in Paris without a friend to help her find her way.

Four years later, Zoe has forged a new life as a painter amidst fellow artists, expats, and revolutionary thinkers struggling to make sense of the world in the aftermath of war. She's adopted this Lost Generation as her new family, so when her dear friend Hadley Hemingway loses a valise containing all of her husband Ernest's writings, Zoe happily volunteers to track it down. But her search for the bag keeps leading to murder victims, and Zoe must again face hard losses?this time among her adopted tribe. If she persists in her reckless quest to find the killer, the next life lost may be her own.

Pulsing with the glamour and excitement of the Jazz Age, Lost in Paris explores a young woman's journey to redeem herself from the heartaches of her past, while finding her way forward in tumultuous, unprecedented times.