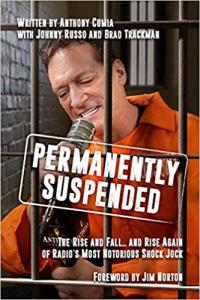 Today, Anthony Cumia is the co-host of the wildly popular “Anthony Cumia Show,” which live-streams to over 100,000 paid subscribers; however, Anthony is most well-known from the legendary, nationally syndicated “Opie and Anthony Show.” Permanently Suspended is an all-access pass to the controversial mayhem that ensued on-and-off the air.

A must-read for all diehard O&A fans, Permanently Suspendedfinally answers the questions that everyone has been waiting for: What really happened between Opie and Anthony? What was the reasoning behind the multiple firings? What prompted the tweeting about the Times Square NYC incident? What is the true account of the controversial allegations? What are the never-before-revealed details of Anthony’s stint in rehab? What does the future hold for his livestream podcast? These questions, and many more, will be answered.

Permanently Suspended is a humorous, no-holds-barred account of the legendary career and life of Anthony Cumia—a blue collar guy who made his dreams come true, rising above all obstacles to become one of the most well-known and successful personalities in radio history.


"Anthony is one of the funniest, smartest guys I've ever done radio with, and an unapologetically masculine man, which is an increasingly rare thing in this ever pussified world we find ourselves in."


"Anthony Cumia always makes me laugh with his awful Jimmy Jackson childhood tales. Can't wait to read his Suffolk county reminiscences because he's smart and as quick on his feet as anybody in comedy."
—Colin Quinn


"Cumia pushes the envelope, that's what you have to love about this guy. He likes to ruffle feathers and knows how to tell a story like nobody's business. In that vein, we're very much alike; except I have a bigger penis. Go buy this book... NOW!"
—Lisa Lampanelli


"Anthony is a natural at funny. Quick, sharp and always on point. He has the kind of funny that genius comes from."
—Andrew "Dice" Clay