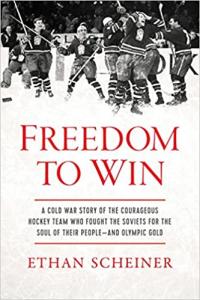 Freedom to Win: A Cold War Story of the Courageous Hockey Team Who Fought the Soviets for the Soul of Their People?And Olympic Gold

During the height of the Cold War, a group of small-town young men would lead their underdog hockey team from the little country of Czechoslovakia against the Soviet Union, the juggernaut in their sport. As they battled on the ice, the young players would keep their people’s quest for freedom alive, and forge a way to fight back against the authoritarian forces that sought to crush them.

From the sudden invasion of Czechoslovakia by an armada of tanks and 500,000 Warsaw Pact soldiers, to a hockey victory over the Soviets that inspired half a million furious citizens to take to the streets in an attempt to destroy all representations that they could find of their occupiers, Freedom to Win ranges from iconic moments in history to courageous individual stories. We will witness the fearless escape by three brothers who made up the core of the national team, thrilling world championship games and gold medal matches. We will watch as a one brave player takes a stand and leads ten thousand people in a tear-filled rendition of the Czechoslovak national anthem amid chants of “freedom!” while a revolution raged in the streets of Prague.

At the heart of Freedom to Win is the story of the Holíks, a Czechoslovak family whose resistance to the Communists embodied the deepest desires of the people of their country. Faced with life under the cruel and arbitrary regime that had stolen their family butcher shop, the Holík boys became national hockey icons and inspirations to their people. Filled with heart-pounding moments on the ice and unforgettable slices of history, Freedom to Win is the ultimate tale of why sports truly matter.


"Ethan Scheiner’s Freedom to Win is, at once, the inspiring tale of a family caught in the maw of the Cold War, and a riveting underdog story about how sports have the power to transcend and transform us all." ? Monte Burke, author of Lords of the Fly, Saban and 4th And Goal

"Freedom to Win is much more than the tale of the underdog Czechoslovakia hockey team taking on the Soviet juggernaut on the ice after the Red Army crushed the 1968 Prague Spring. While focusing on hockey, it manages to tell the entire modern story of the Czechs and Slovaks and their remarkable quest for freedom. This highly readable book deserves to make Czechoslovakia's "Miracle on Ice" as familiar as the better known (at least to American fans) U.S. hockey triumph at the 1980 Olympics." ? Max Boot, author of "The Road Not Taken: Edward Lansdale and the American Tragedy in Vietnam"