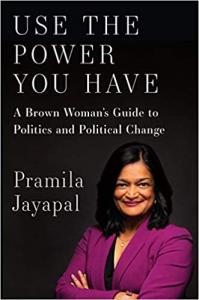 Use the Power You Have: A Brown Woman’s Guide to Politics and Political Change

In November 2016, Pramila Jayapal (D-WA) was elected to the U.S. House of Representatives, the first Indian American woman to serve in that role. Two years later, the “fast-rising Democratic star and determined critic of President Donald Trump,” according to Politico’s Playbook 2017 “Power List,” won reelection with more votes than any other member of the House. Jayapal, co-chair of the Congressional Progressive Caucus, proved her progressive bonafides when she introduced the most comprehensive Medicare-for-all bill to Congress in February.

Behind the story of Jayapal’s rise to political prominence lie over two decades of devoted advocacy on behalf of immigrants and progressive causes—and years of learning how to turn activism into public policy that serves all Americans. Use the Power You Have is Jayapal’s account of the path from sixteen-year-old Indian immigrant to grassroots activist, state senator, and now progressive powerhouse in Washington, DC.

Written with passion and insight, Use the Power You Have offers a wealth of ideas and inspiration for a new generation of engaged citizens interested in fighting back and making change, whether in Washington or in their own communities.


“Passionate and unapologetically leftist, this hopeful book not only chronicles an immigrant’s political successes, but, more significantly, the enduring faith in American democracy that inspired them.”
—Kirkus Reviews

“The model Jayapal is offering would serve as a manual for any young woman hoping to make her way in American politics, and is suitable for young people interested in exploring a political career.”
—Library Journal

“Wise, thoughtful, and meticulously well-organized. . . . It’s both an unusual insider’s account of Trump-era politics in D.C. (including Jayapal’s relationships with other Democratic leaders) and a fierce call for all citizens, no matter their roles in society, to use the power they have. . . . Jayapal recounts her activist career and lays out thoughtful policy proposals in a warm, keen-eyed memoir.”
—Shelf Awareness

“Jayapal is genuinely captivating when writing about her determination to fight for the poor and oppressed. This inspirational chronicle frequently rises above the pitfalls of political memoir.”
—Publishers Weekly

“Congresswoman Pramila Jayapal—activist, legislator, organizer—has written a handbook for anyone who seeks to improve their community and change our nation for the better. Through an honest reflection on her personal journey as an immigrant woman of color to the corridors of power‚ Pramila shares dynamic lessons on how those who are too often on the margins can become the center of a revolution. Use the Power You Have is an insightful testimony on the capacity for progress and a primer on creating opportunity for all.”
—Stacey Abrams

“A beautifully told story of relentless courage that should serve as a model to us all. At every turn, Rep. Jayapal has followed her inner light, fighting for the most vulnerable when it mattered most.”
—Naomi Klein, author of On Fire: The Burning Case for a Green New Deal

“Pramila’s story—and the important lessons she’s learned along the way—will inspire anyone who cares deeply about progressive change and how to achieve it. Her book isn’t just a powerful reflection on why running for office matters. It’s the best argument we have for why, with the stakes so high, more progressives—especially women and people of color—must get off the sidelines and into the game.”
—Representative Alexandria Ocasio-Cortez (D-NY)

“Pramila Jayapal is a great organizer—and a writer who helps readers find their own greatness.”
—Gloria Steinem

“Pramila Jayapal’s journey to leadership is full of hope and wisdom. She helps us see what is possible in an American democracy where we all participate, while offering a clear vision for how we get there.”
—Ai-jen Poo, director, National Domestic Workers Alliance

“As wise and inspiring as it is instructive, this book gives readers the tools to build power in their communities—and more importantly, to see the power in themselves. I only wish I had Use the Power You Have as a young woman embarking on my own journey.”
—Vanita Gupta, president and chief executive officer, Leadership Conference on Civil and Human Rights

“This book is a rare treat: a look into the mind and heart of one of the most inspiring political figures in our landscape today.”
—Ilyse Hogue, president, NARAL Pro-Choice America