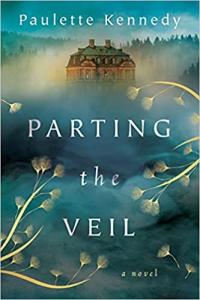 When Eliza Sullivan inherits an estate from a recently deceased aunt, she leaves behind a grievous and guilt-ridden past in New Orleans for rural England and a fresh start. Eliza arrives at her new home and finds herself falling for the mysterious lord of Havenwood, Malcolm Winfield. Despite the sinister rumors that surround him, Eliza is drawn to his melancholy charm and his crumbling, once-beautiful mansion. With enough love, she thinks, both man and manor could be repaired.

Not long into their marriage, Eliza fears that she should have listened to the locals. There’s something terribly wrong at Havenwood Manor: Forbidden rooms. Ghostly whispers in the shadows. Strangely guarded servants. And Malcolm’s threatening moods, as changeable as night and day.

As Eliza delves deeper into Malcolm’s troubling history, the dark secrets she unearths gain a frightening power. Has she married a man or a monster? For Eliza, uncovering the truth will either save her or destroy her.


“A beautiful, crumbling mansion in the English countryside; a charming but enigmatic viscount; ghosts; rumors; and a labyrinth of dark secrets, lies, twists, and well-executed turns…As if that wasn’t enough, add rich atmosphere and an American-heiress heroine determined to settle her own future. Kennedy has crafted a delicious, romantic gothic mystery that will keep readers guessing even as they’re feverishly turning the final pages.” —Megan Chance, author of A Splendid Ruin

“I was riveted by Paulette Kennedy’s Parting the Veil, a dazzling debut that hearkens to the best of the classic gothic tradition but with a sensibility that will appeal to modern readers. Kennedy writes with compassion, attention to detail, and the confident prose of a seasoned writer. Deliciously eerie, passionate, and suspenseful, this book is an emotional roller coaster that kept me turning its pages long into the night.” —Jo Kaplan, author of It Will Just Be Us

“If you love a gothic tale full of twists and turns and things that go bump in the night, Paulette Kennedy’s Parting the Veil is a not-to-be-missed treat. This debut is the perfect book to curl up with on a stormy night, but don’t expect to put it down easily. And don’t forget the Earl Grey and biscuits.” —Barbara Davis, bestselling author of The Last of the Moon Girls

“An American heiress with a scandalous past meets a mysterious British lord in this swoon-worthy gothic thriller. Parting the Veil takes familiar plot elements—a ruined mansion, family secrets—and gives them a sexy, modern twist. This stunning debut from Paulette Kennedy kept me guessing until the very end!” —Elizabeth Blackwell, author of Red Mistress and On a Cold Dark Sea

“Parting the Veil is a gothic romance full of sly and sometimes shocking twists and turns, with the requisite crumbling manor house, loads of secrets, and long, haunting shadows of grief. Kennedy spares no mercy for a bucolic English village that teems with lies, forbidden desires, and murder.” —Kim Taylor Blakemore, author of After Alice Fell

“Atmospheric and cleverly plotted, Parting the Veil grabbed me from the first page and tightened its grip with each immersive chapter. Whenever I thought I knew how it would end, Kennedy’s haunting debut surprised me, while delivering gothic chills alongside each captivating twist. Clear your schedule to read in one sitting like I did.” —Elle Marr, Amazon Charts bestselling author of The Missing Sister and Lies We Bury

“Absolutely enthralling. This sultry, mysterious, and immersive tale had me in its grasp from page one.” —Laura McHugh, award-winning author of What’s Done in Darkness