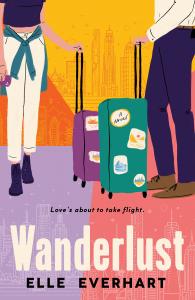 People We Meet on Vacation meets The Unhoneymooners in this sparkling debut romantic comedy about two near strangers—and complete opposites—who win a radio contest for a trip around the world.

Love's about to take flight.

Feeling stuck at work and tired of London’s dreary weather, magazine writer Dylan Coughlan impulsively rings a radio station one day only to win a once-in-a-lifetime trip around the world. The catch? Her travel partner must be a contact randomly selected on her phone. And of course this stressful game of contact roulette lands on a number listed only as Jack the Posho, an uptight, unbearably posh guy she met on a night out and accidentally ghosted.

The two couldn’t be more different, and as the trip kicks off, Jack seems like he’d sooner fling himself into the sun than have a conversation with Dylan. But more is hinging on this trip than the chance to see the world. For the past two years, Dylan’s been relegated to writing quizzes (and only quizzes) at her lifestyle magazine after an article about her past abortion went viral—and not in the good way. If she’s able to make a series about their trip successful, her overbearing boss will give her a chance at a permanent column. Dylan’s willing to do anything to make the series a hit, even if it means embellishing her and Jack’s relationship to satisfy readers. But as the column’s popularity grows, so does the bond between Dylan and Jack, and Dylan is forced to consider if the one thing she thought she always wanted is worth the price she'll have to pay to get there.


"WANDERLUST is an absolutely stunning rom-com debut! Elle Everhart masterfully crafts a heartfelt and adorable love story while also delving into complex family relationships and seriously relatable real life issues. On top of characters I immediately fell in love with, the book takes us on a gorgeous trip around the world--I was left with major travel envy! This romance had me smiling the entire time, even through my tears. Elle Everhart is a writer to watch!" --Falon Ballard, author of JUST MY TYPE

“Elle Everhart more than delivers with a sparkling voice, mastery of craft, and character chemistry that sizzles off the page, all while unpacking the timely and critical topic of reproductive justice. Carefree yet complex Dylan and adorably uptight cinnamon roll Jack stole my heart and swept me around the world in this cinematic, immersive, steamy dream of a ride!” —Courtney Kae, author of In the Event of Love

“Elle Everhart’s debut is laugh-out-loud funny, sizzling hot, and full of heart. Jack and Dylan are undeniable proof that opposites do attract, and following them around the world is the great escape we all need right now!” —Jenny L. Howe, author of The Make-Up Test and On the Plus Side