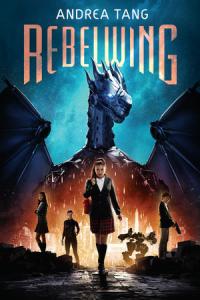 One minute, she’s cashing in on a routine smuggling deal. The next, she’s escaping enforcers on the wings of what very much appears to be a sentient cybernetic dragon.

Pru is used to life throwing her some unpleasant surprises–she goes to prep school, after all, and selling banned media across the border in a country with a ruthless corporate government obviously has its risks. But a cybernetic dragon? That’s new.

She tries to forget about the fact that the only reason she’s not in jail is because some sort of robot saved her, and that she’s going to have to get a new side job now that enforcers are on to her. So she’s not exactly thrilled when Rebelwing shows up again.

Even worse, it’s become increasingly clear that the rogue machine has imprinted on her permanently, which means she’d better figure out this whole piloting-a-dragon thing–fast. Because Rebelwing just happens to be the ridiculously expensive weapon her government needs in a brewing war with its neighbor, and Pru’s the only one who can fly it.

Set in a wonderfully inventive near-future Washington, D.C., this hilarious, defiant debut sparkles with wit and wisdom, deftly exploring media consumption, personal freedoms, and the weight of one life as Pru, rather reluctantly, takes to the skies.

Reviews:
"Tang’s prose is snappy, Pru’s voice strikes a likeable balance between sarcastic and sincere, and the inclusive cast is fleshed out, making this an enjoyable tale of political conspiracy."
—Publishers Weekly

"The writing is excellent, the characters well drawn and the mech-dragon offers a unique spin...Fantasy readers will be enthralled."
—School Library Journal

“An engaging high tech fairy tale in which storytelling is as much a part of the resistance as the battles themselves.”
—Natalie C. Parker, author of Seafire

“High stakes and dazzlingly clever, Rebelwing explores the glorious and devastating impact revolution has on society—but also the toll that war takes its heroes, across multiple generations. You can’t help but fall in love with these characters and their wild dystopic world of book smuggling and mechadragons.”
—Victoria Lee, author of The Fever King

“Anime fans rejoice! Andrea Tang’s REBELWING is a stunning, witty blend of giant mecha battles and complex, multi-faceted characters, set against the backdrop of a near-future North America. Pru and her motley group of friends challenge one another, flirt outrageously, and discuss politics, philosophy, and the diaspora, just as they’re swept up on the wings of revolution. Immersive and riveting—this is sci-fi at its very best.”
—Axie Oh, award-winning author of Rebel Seoul

"Rebelwing is a brilliant sci-fi debut that had my heart at cybernetic dragons. Full of clever banter and characters that burst from the pages, Andrea Tang’s writing is nuanced and captivating—I was entranced from beginning to end!”
—Akemi Dawn Bowman

"A rollicking, razor-sharp tale of family, war, and revolution."
—Tochi Onyebuchi, author of Beasts Made of Night, Crown of Thunder, and  War Girls

"Freedom! Revolution! Mecha-dragons! Soaring with wit, heart, and thrilling heroics in spades, Rebelwing is too much fun to put down."
—Emily Skrutskie, author of Hullmetal Girls