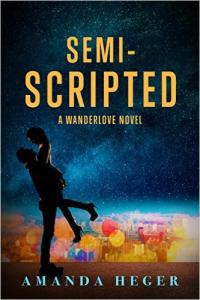 Marisol Gutierrez has come to Los Angeles with a single goal: win the prestigious grant that will save her family's struggling medical clinic back in Nicaragua. But, when a cute guy invites her to sit in the audience of a hip-but-failing comedy program, Marisol figures she'll get a little entertainment out of her otherwise stress-filled trip.

Evan Abramson thought an internship at "The So Late It's Early Show" would be the start of a long television-writing career, but their ratings are sinking. With every show, his plans seem one step closer to collapse. When a backstage crisis throws him into an onstage encounter with a gorgeous and charming audience member, Evan and Marisol become overnight sensations. And soon their made-for-television romance is the only thing keeping "So Late" from cancellation.

As things heat up onscreen and off, Marisol and Evan are caught between their careers and their growing feelings for one another. Being together in front of the cameras puts Marisol's grant at risk, but keeping their romance off-screen means Evan's show is sure to fail. Together they have to decide whether to stick with the script and save their careers or improvise their way toward a happily ever after.


"Heger’s romance is light and funny, with lots of breezy banter. And there’s a neat twist to the second novel in her Wanderlove series, following Without Borders (2016): the diabetic heroine displays an insulin pump, demonstrating that people with serious conditions can lead adventurous lives."
—Booklist


"Marisol Gutierrez is a heroine who marches onto the page and into readers' hearts. Instantly lovable, her infectious personality and winsome sense of humor are without a doubt the highlight of the novel."
—RT Review