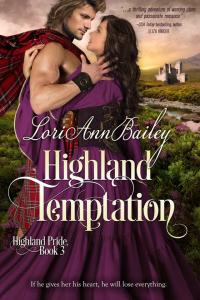 Alan Mackenzie can’t believe it when his laird’s sister takes on some foolhardy mission to get close to every male in a rival clan, in the hopes of uncovering who’s behind the plot to kill her brothers. He may not be good enough for Kirstie, but he’ll be damned if anyone else touches her. But he’s undercover as well, and one false move could betray them both.

Kirstie Cameron’s brothers are in danger, and if she has to flirt with the enemy to save them, she will. But her plans are hindered when the annoyingly handsome Alan Mackenzie refuses to leave her alone. He broke her heart years ago, and now he’s working with the other side. She’ll never forgive him if he ruins her plans. But she can’t deny the attraction between them.

He can’t stay away. She can’t push him away. And the temptation could get them all killed.