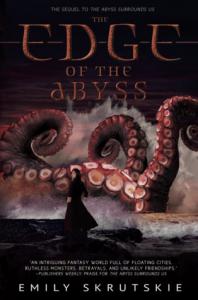 The Edge of the Abyss

Three weeks have passed since Cassandra Leung pledged her allegiance to the ruthless pirate-queen Santa Elena and set free Bao, the sea monster Reckoner she’d been forced to train. The days as a pirate trainee are long and grueling, but it’s not the physical pain that Cas dreads most. It’s being forced to work with Swift, the pirate girl who broke her heart.

But Cas has even bigger problems when she discovers that Bao is not the only monster swimming free. Other Reckoners illegally sold to pirates have escaped their captors and are taking the NeoPacific by storm, attacking ships at random and ruining the ocean ecosystem. As a Reckoner trainer, Cas might be the only one who can stop them. But how can she take up arms against creatures she used to care for and protect?

Will Cas embrace the murky morals that life as a pirate brings or perish in the dark waters of the NeoPacific?

Reviews:
"Skrutskie deftly balances introspection and action, making for a page-turning, thoughtful read. Her worldbuilding envisions a brutal and diverse future: gender is no barrier to success—kick-ass women abound, most notably brown-skinned Santa Elena and white Swift—and neither, for the most part, is race, although differences are both acknowledged and celebrated... A dazzling, satisfying sequel. "
—Kirkus Reviews, starred