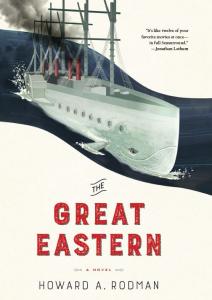 A sprawling adventure pitting two of literature's most iconic anti-heroes against each other: Captain Nemo and Captain Ahab. Caught between them: real-life British engineer Isambard Kingdom Brunel, builder of the century's greatest ship, The Great Eastern. But when he's kidnapped by Nemo to help design a submarine with which to fight the laying of the Translatlantic cable - linking the two colonialist forces Nemo hates, England and the US - Brunel finds himself going up against his own ship, and the strange man hired to protect it, Captain Ahab, in a battle for the soul of the 19th century.


• The Toronto Globe and Mail Summer’s Best Books: Stuff Your Beach Bag with These Compulsive Reads

• Inside Hook Best New Books of the Month for June 2019


"Genuine scientific and engineering discovery meets pure invention. This is a novel that should have a wide appeal, certainly not the preserve of steam punk enthusiasts alone, it will delight nineteenth century adventure buffs and lovers of perfectly executed pastiche too. The prose has a rhythm that is almost sing song and fizzes. Turn a page and meet a new adventure. This is a party on the page. Rodman has fun with resurrecting the dead and breathing new life into the never born, creating an adventure but also a fascinating backstory for each of the characters. This is a fantasy that cleverly opens up our understanding of the age it is set in. I will have nothing but warm, fond memories of The Great Eastern."
—NB Magazine

"Rodman bench presses the seemingly impossible and plausibly lifts us into this breathless page-turner...I would say great American novel but The Great Eastern is more than that. It’s world class. Pantheon literature...This is a midnight oil read. It pays homage to nineteenth-century sentence structure and vocabulary without being hoity-toity or austere...The Great Eastern is magnificent historic science fiction engaging us with the fact of now-knowing thought—the personal oceans inside our heads."
—The Review Graveyard

"Rodman took a big risk and it paid off with one of the most interesting ideas for a book you’ll find in 2019."
—Inside Hook

"An absolutely ingenious premise propels this audacious adventure into surprising and thrilling territory, where history twists and braids itself like the transatlantic cable at the heart of this epic narrative. Howard Rodman's powers of invention, connective synthesis, and grim humor are matched only by his literary ventriloquism and psychological insight. Seems to me this kaleidoscopic tall tale is a ready-made binge-read!"
—Steven Soderbergh, director of Schizopolis

“A weird and wondrous adventure, chock full of rich, commanding prose detailing the clash between arrogant geniuses of considerable ego, and the historical ripples such a clash imparts. Reminiscent in all the best ways of Robert McCammon’s Matthew Corbett books."
—Chuck Wendig, New York Times Bestselling Author of Wanderers

“Here be port of embarkation for the SS Rodman as it sets sail above and below the waves of modern imagination. First mate Melville is in the crow’s nest, eyes full of blue sky and white monsters, and navigator Verne is submerged in deep whirlpools of the teardrop hull no seafarer has plumbed. Not another scrivener alive or dead but Rodman – lyrical and witty, erudite and passionate, dare we say rapturous, dare we say obsessed – could have charted let alone helmed this singular, exhilarating flying-dutchman of an epic.”
—Steve Erickson

“For anyone with a weakness for Herman Melville, Jules Verne, 19th century nautical hijinx, or just a helluva great story, The Great Eastern is for you.”
—Jake Gyllenhaal

“Wildly inventive and richly imagined historical fiction that mashes up fact with the fantastic to create a singular, original reading experience. I loved it.”
—Mark Haskell Smith

"Seriously, this is the sort of thing that readers of China Mieville or Alan Moore or Eleanor Catton should gobble up. A historical phantasmagoria and ripping adventure done as a game of hide-and-seek. It’s like twelve of your favorite movies at once, in full sensurround."
—Jonathan Lethem

“Howard Rodman's The Great Eastern is a book of confabulations, real and imagined. Surprises on every page.  A splendid and notable achievement.”
—Ricky Jay

"The novel The Great Eastern is the ultimate confluence of the nineteenth-century, its technological advances, anti-heroes, and crimes. Howard Rodman’s swashbuckling adventure pits Herman Melville’s Captain Ahab against Jules Verne’s Captain Nemo in a very real struggle for the future. Rodman weaves his sly picaresque around the actual story of the British engineer Isambard Kingdom Brunei,  builder of the century’s greatest ship, and his mission to lay down the Transatlantic cable forever linking the great colonial powers of the time."
—Walter Mosley