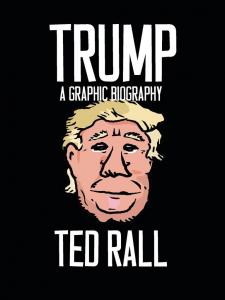 Ted Rall's Trump opens with a discussion of the authoritarian impulse. Drawing a historical parallel between the rise of Mussolini and Hitler and the aftermath of the 2008-2009 economic crisis in America, Rall considers Trump to be "a bit of an accidental authoritarian, perhaps even an accidental proto-fascist. So where did this man come from?" Trump's life story is told, going all the way back to his origins growing up a rich kid in the New York suburbs. Rall shows how Trump taps into a longing among many Americans for a strongman. He doesn't make many promises; his supporters don't expect many. He'll Make America Great Again. Somehow. Trust me, he says. And they do.

Reviews:
“The proper medium for a Donald Trump biography. [Ted Rall], a cartoonist, has succeeded at explicating the Trump phenomenon better than most. [His] excellent Trump: A Graphic Biography sketches in Trump’s life story. Rall’s cartooning style adds a silly charm to an otherwise serious endeavor: a spoonful of sugar, perhaps. But Trump is also an attempt to grapple with Trumpism, a noun that seems certain to endure even if the candidacy ultimately goes down in flames.”
—Vanity Fair

"As the go-to quick-hit graphic biographer of the current political circus, [Rall] doesn't let his viewpoint get in the way of some sharp analysis of the Republican primary. [Trump: A Graphic Biography] is a concise and decently footnoted pocket political biography that Clinton's campaign should buy thousands of and distribute to voters for free."
—Publisher's Weekly