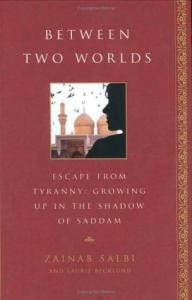 Between Two Worlds: Escape From Tyranny : Growing Up In The Shadow Of Saddam

Zainab Salbi was eleven years old when her father was chosen to be Saddam Hussein's personal pilot and her family's life was grafted onto his. Her mother, the beautiful Alia, taught her daughter the skills she needed to survive. A plastic smile. Saying yes. Burying in boxes in her mind the horrors she glimpsed around her. "Learn to erase your memories," she instructed. "He can read eyes."

In this richly visual memoir, Salbi describes tyranny as she saw it--through the eyes of a privileged child, a rebellious teenager, a violated wife, and ultimately a public figure fighting to overcome the skill that once kept her alive: silence.

Between Two Worlds is a riveting quest for truth that deepens our understanding of the universal themes of power, fear, sexual subjugation, and the question one generation asks the one before it: How could you have let this happen to us?

Reviews:
"'And who is Saddam Hussein?' Salbi's spirited mother demands aloud.  The answer in this harrowing, exquisite book--Between Two Worlds--is the devil himself. More than the brilliant non-fiction of Ryszard Kapuscinski about Haile Selassie or the Shah of Iran, more even than Albert Speer's account of designing for Hitler, this modest book perfectly conveys the slow, relentless poison released at the center of a dictator's orbit.”
—Chicago Tribune


“Fearlessly candid memoir….Her book, a torrent of vividly recalled memories, reads with the sort of artless verve that can come only from one who’s been unshackled from a life-time of repression.”
—Vogue


“This may be the most honest account of life within Saddam’s circle so far; not a rebel’s account, although Salbi is certainly a dissident, rather, it’s an enlightening revelations of how, by barely perceptible stages, decent people make accommodations in a horrific regime.”
—Publishers Weekly (starred)


"A remarkable, astonishing memoir...more can be learned about Iraq from this book than from all the newscasts."
—Alice Walker, author of The Color Purple


"A country unravels and a loving family dissolves in Zainab Salbi's riveting, beautifully observed memoir...This is the exquisite if often painful story of Salbi's own emergence from victim to global activist on behalf of women survivors of violence and war everywhere. I guarantee you won't be able to put it down."
—Ellen Chesler, author of Woman of Valor: Margaret Sanger and the Birth Control Movement in America


"A personal, intimate look at the soul-crushing impact of Hussein’s Iraq. . . . Salbi deploys a straightforward, easy prose that is powerful in its simplicity. . . . Now, with her chilling memoir, the lies end."
—The Washington Post


"Salbi calmly but frankly looks back on those years, some of which were marked by war between Iraq and Iran, cataloging her growing awareness of the terrible hold Hussein had on her family, especially on her mother, who, in an attempt to save Salbi from Hussein's grasp, married her to an Iraqi stranger in America who became abusive. Relayed without stridency or bitterness, this compelling memoir is not only a story of personal success but also a fascinating glimpse at a fanatical leader, who, in his quest for power, sacrificed his own people."
—Booklist


"Salbi has direct personal knowledge of Hussein that is both insightful and disturbing."
—Ms. Magazine