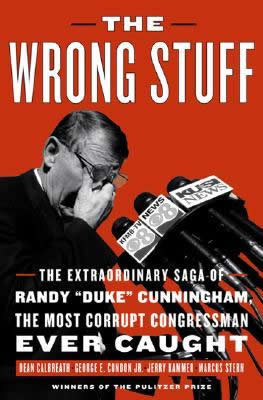 The Wrong Stuff: The Extraordinary Saga of Randy

Duke Cunningham was an All-American success story. The Midwestern boy who went off to war, became a hero, and rode his fame into Congress even bragged that Tom Cruise played him in a popular movie. But the fall of this "Top Gun" was almost as epic and just as cinematic. Today he sits in prison, branded as the most corrupt member of Congress in U.S. history.

To the public, Cunningham was a heroic family man. In reality, he was a hard-drinking, partisan bully with a lavish sense of entitlement and feckless moral compass. He partnered with rogues like Brent Wilkes and Mitch Wade, and together they hatched a grandiose plan to get rich wrapping themselves in the flag. Over time, Cunningham fed Wilkes and Wade tens of millions of dollars in vital post-9/11 contracts in exchange for millions in bribes. Their clubhouse was a yacht tied up along the Potomac River. From there, they traveled the city in limos, flew in private jets, and hosted all-night parties at posh hotels. Their funding came from "earmarks" in classified military contracts that were supposed to protect our troops in Iraq, and not be squandered on booze and beautiful women, on yachts and jets.

Now, members of the team that won the 2006 Pulitzer Prize for sending Cunningham to prison uncover new details in a story still unfolding in Washington. The Wrong Stuff chronicles Cunningham's rise and his sordid fall. It is the saga of a man who came to believe his own press clippings and developed an enormous sense of self-entitlement, a man strong enough to brave enemy fire but too weak to resist the corrupt contractors and lobbyists in the nation's capital. It is also the story of the shadowy side of Washington today. More than just the story of one crooked politician, this is an inside look at how our system allowed this to happen. The Wrong Stuff provides the context for Cunningham's misdeeds and shows that more than one man's venality was involved. Indeed, there were things darkly wrong with Washington that invited Cunningham, and others, to steal, often putting American soldiers and Marines at risk during wartime.

If you want to understand the recent outcry over congressional corruption, then you need to understand how Cunningham and his contractor friends used the government to enrich themselves. This penetrating, witty, and gossipy analysis of how they stole and how they got caught makes for a fascinating read with a lesson for all Americans.