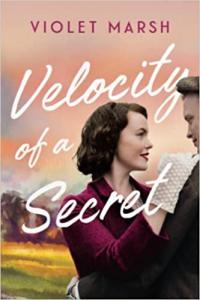 Velocity of a Secret

An intrepid heroine confronts the dark underworld of espionage and war in this daring historical romance by Violet Marsh, the award-winning author of The Aviatrix.

It’s spring 1919, and the Great War has ended. New life flourishes on the red cliffs of the Northern Isles of Scotland?sea pinks and primrose, puffins and guillemots. But this windswept corner of the world harbors a dark secret.

Rose Van Etten has always reveled in danger and defiance. When the war started, she went from racing cars to driving ambulances and learned of an insidious spy ring from a dying soldier. Now that the war is over, she ventures to Scotland in search of the truth.

The isles’ stark beauty quickly captivates her, but so does one of the locals. Unlike most men, the rugged, Viking-esque Thorfinn Sinclair respects Rose’s independent spirit. It seems she’s met her equal.

But Thorfinn has secrets of his own. Fiercely loyal to home and family, he will do whatever it takes to protect the land he loves. As the spies close in, Rose must decide for herself: Is Thorfinn friend or foe?