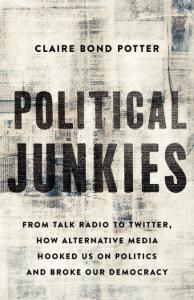 Political Junkies: From Talk Radio to Twitter, How Alternative Media Hooked Us on Politics and Broke Our Democracy

A wide-ranging history of seventy years of change in political media, and how it transformed — and fractured — American politics

From independent newsletters in the 1950s to talk radio in the 1970s to cable television in the 1980s, pioneers on the left and right developed alternative media outlets that made politics more popular, and ultimately, more partisan. When campaign operatives took up e-mail, blogging, and social media, they only supercharged these trends. At a time when political engagement has never been greater and trust has never been lower, Political Junkies is essential reading for understanding how we got here.

Reviews:
"Do you follow political news obsessively? Do you tweet about it even more obsessively still, compulsively dismissing and disbelieving all information that doesn’t fit your ideological lens? You might be a political junkie! You’re not alone. In this incisive, clear-headed book, Claire Potter diagnoses the condition ailing so many of us, and persuasively argues that it’s bad for democracy.Political Junkies is wise, open-minded, and bracing.”
—Liza Featherstone, author of Divining Desire: Focus Groups and the Culture of Consultation

“In her lively new book, Claire Potter tackles a topic too many historians ignore—the central role media play in shaping our political lives. From the political newsletters of the 1950s to cables news in the 1980s to the social-media revolution of the 2000s, Potter maps the ways alternative media remade our politics, broke our democracy, and gave birth to a new kind of American: the political junkie.”
—Nicole Hemmer, author of Messengers of the Right: Conservative Media and the Transformation of American Politics

"To understand 21st-century populism, we need to know the media that helped to create it. Claire Potter's Political Junkies tells that story—sometimes glorious, sometimes dismal, but always fascinating and well worth the read."
—Beverly Gage, author of The Day Wall Street Exploded: A Story of America in Its First Age of Terror

“I’m a political junkie, and if you’re reading this, you probably are too. Which means you’re going to want to grab Claire Potter’s new book and dive in. This vivid, lively narrative shows us how the rise of political populism and the emergence of alternative media have gone hand in hand. Spotlighting the operatives you haven't heard of, the innovations you didn’t know about, and the stories you haven't heard, Potter reveals the history that happened when we were looking the other way. The gatekeepers have fallen, the barbarians are inside the city, and Political Junkies¬—with insight, fresh detail, and delicious wit—makes sense of how it all happened.”
—David Greenberg, author of Republic of Spin: An Inside History of the American Presidency