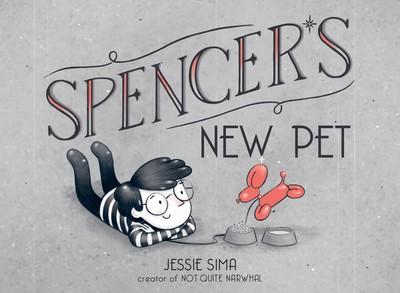 From the creator of Not Quite Narwhal comes a classic tale of a boy and his dog—except in this unique story, one of them is a balloon!

When Spencer gets a new pet, he’s excited to do all the things that pets do—taking walks in the park, going to the vet, and attending parties together.

There’s just one hitch: Spencer’s new pet is a balloon.

And that means No. Sharp. Objects.

No drooling dogs at the park. No prickly porcupines at the vet. And absolutely no pinning tails on any donkeys!

Spencer’s New Pet is a story of pure fun about a boy, his dog, and a friendship that endures life’s sharpest...and most unexpected twists.

Reviews:
"This heartwarming story is cleverly executed as it leads the reader from page to page in anticipation of the next surprising element. Illustrated in charmingly eye-catching illustrations comprised of shades of gray, black, and white, the dog takes center stage as the only character completely shaded in red. This is the perfect book to use with primary-age children who can offer their perceptions of what is happening throughout the wordless story, either verbally or in a creative writing exercise. "
—School Library Connection

"With many nods to silent film—including a black-and-white palette, elegant title cards dividing the story into three parts, highly dramatic close-ups, and iris shots—Sima (Love, Z) tells the nearly wordless story of a bespectacled boy and the dog he loves very much."
—Publisher's Weekly (starred)

"Homage to black-and-white silent films...Sima (Not Quite Narwhal, 2016), whose adorable illustrations never fail to charm, has crafted an entirely immersive reading experience. You can almost hear the purr of old film reels as the opening endpapers launch a countdown. Stylized title cards separate the robust page count into three acts, and despite using no words and precious little color, the emotion and drama burn bright. While the clever conceit could go over the heads of younger readers, they will nonetheless be delighted by this heartwarming and suspenseful story of a boy and his dog, the ending of which will leave them eager for a second reading."
—Booklist (starred)

"As befitting the vintage-movie conceit, there are close-ups, wide-angles, and multiple vignettes of the breathless, careening chase across the pages. The illustrations are in shades of black, white, and gray with only the red dog providing a splash of color. Spencer presents white, but there is diversity in the depictions of the additional characters. Young readers will be tickled and amazed and will want to view it again and again.Original and thoroughly delightful."
—Kirkus Review (starred)