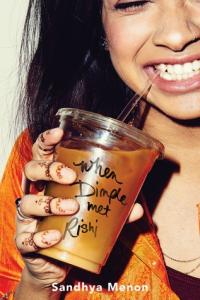 A laugh-out-loud, heartfelt YA romantic comedy, told in alternating perspectives, about two Indian-American teens whose parents have arranged for them to be married.

Dimple Shah has it all figured out. With graduation behind her, she's more than ready for a break from her family, from Mamma's inexplicable obsession with her finding the "Ideal Indian Husband." Ugh. Dimple knows they must respect her principles on some level, though. If they truly believed she needed a husband right now, they wouldn't have paid for her to attend a summer program for aspiring web developers...right?

Rishi Patel is a hopeless romantic. So when his parents tell him that his future wife will be attending the same summer program as him, wherein he'll have to woo her, he's totally on board. Because as silly as it sounds to most people in his life, Rishi wants to be arranged, believes in the power of tradition, stability, and being a part of something much bigger than himself.

The Shahs and Patels didn't mean to start turning the wheels on this "suggested arrangement" so early in their children's lives, but when they noticed them both gravitate toward the same summer program, they figured, Why not?

Dimple and Rishi may think they have each other figured out. But when opposites clash, love works hard to prove itself in the most unexpected ways.

"In the alternating voice of her two protagonists, Menon explores themes of culture and identity with insight and warmth...Readers will be caught up as Rishi and Dimple navigate their ever changing, swoonworthy connection, which plays out as the app competition and complicated social scene intensify. Heartwarming, empathetic, and often hilarious, a delightful read."
—Kirkus Reviews, starred

"While Menon's portrayal of the struggles of Indian American teens is both nuanced and thoughtful, it is her ability to fuse a classic coming-of-age love story with the contemporary world of nerd culture, cons, and coding camp, that will melt the hearts of readers."
—Booklist

"The strength of the story comes from its blending of Indian culture and values into a modern-day romance that scores of readers can enjoy. This novel touches on issues of identity while remaining light and fun. Verdict: A strong choice for any young adult collection."
—School Library Journal

"The arranged marriage YA rom-com we've been waiting for."
—Bustle Magazine

"This book is a hug you can carry, but it's also a smart exploration of how hard it can be to hold onto who you are and what you want if you dare to let someone else in."
—Barnes and Noble Teen Book Blog

“Not only will you want to hug this book, but it’ll hug you back.”
—Book Riot

"The cultural pleasure and pressures each teen faces are integral to the way Rishi and Dimple approach their everyday lives and relationships, and the ethos is unapologetically positive even as Dimple chafes against her mother's traditional approach to femininity. With just the right blend of substance and fluff, this makes for a perfectly sign-worthy beach read."
—The Bulletin of the Chamber for Children's Books