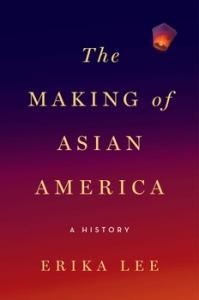 The Making of Asian America: A History

The definitive history of Asian Americans by one of the nation's preeminent scholars on the subject.

In the past fifty years, Asian Americans have helped change the face of America and are now the fastest growing group in the United States. But as award-winning historian Erika Lee reminds us, Asian Americans also have deep roots in the country. The Making of Asian America tells the little-known history of Asian Americans and their role in American life, from the arrival of the first Asians in the Americas to the present-day.

An epic history of global journeys and new beginnings, this book shows how generations of Asian immigrants and their American-born descendants have made and remade Asian American life in the United States: sailors who came on the first trans-Pacific ships in the 1500s; indentured "coolies" who worked alongside African slaves in the Caribbean; and Chinese, Japanese, Filipino, Korean, and South Asian immigrants who were recruited to work in the United States only to face massive racial discrimination, Asian exclusion laws, and for Japanese Americans, incarceration during World War II. Over the past fifty years, a new Asian America has emerged out of community activism and the arrival of new immigrants and refugees. No longer a "despised minority," Asian Americans are now held up as America"s "model minorities" in ways that reveal the complicated role that race still plays in the United States.

Published to commemorate the fiftieth anniversary of the passage of the United States' Immigration and Nationality Act of 1965 that has remade our "nation of immigrants," this is a new and definitive history of Asian Americans. But more than that, it is a new way of understanding America itself, its complicated histories of race and immigration, and its place in the world today.

Reviews:
"Lee's monumental work spans 500 years and extends from Canada through the United States to several Latin American countries, notably Mexico, Brazil and Peru. She manages the sweep of her history and its multitudes deftly, drawing on archival research and the significant body of historical work done by many predecessors. Lee handles her scholarly materials with grace, never overwhelming the reader with too many facts or incidents. Powerful Asian American stories like these are inspiring, and Lee herself does them justice in a book that is long overdue."
—Los Angeles Times

"Lee’s book provides a useful and important upgrade (of Asian American history) by broadening the scope and, at times, deepening the investigations…When I read the key Asian American histories of Ronald Takaki and Sucheng Chan, a canon that I suspect Erika Lee will soon join, I marvel at their insights into pre-’65 Asian America…"
—New York Times Book Review


"An impressive work that details how this diverse population has both swayed and been affected by the United States. Highly recommended for readers interested in this important topic."
—Literary Journal (starred)


"To honor the 50th anniversary of the U.S. Immigration and Nationality Act, Lee (Angel Island), University of Minnesota historian and director of the Immigration History Research Center, tackles the sensitive subject of Asian-American assimilation in this ambitious, sweeping, and insightful survey."
—Publisher’s Weekly


"Building on the best and newest scholarship, Erika Lee has written a sweeping yet personal and critical history of Asian Americans across centuries, continents, and diverse cultures without losing sight of the global, racial, and historical contexts of Asian migration, exclusion, and resettlement.  A definitive and ideal text for college classes and the general public, The Making of Asian America is truly an enjoyable, informative, and insightful read."
—Judy Yung, Professor Emerita of American Studies at the University of California, Santa Cruz, and author of Unbound Feet: A Social History of Chinese Women in San Francisco


"A sweeping study of the fastest growing group in the United States…. A powerful, timely story told with method and dignity."
—Kirkus Reviews (starred)