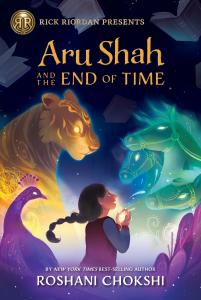 Aru Shah and the End of Time (Pandava Series Book 1)

Twelve-year-old Aru Shah has a tendency to stretch the truth in order to fit in at school. While her classmates are jetting off to family vacations in exotic locales, she'll be spending her autumn break at home, in the Museum of Ancient Indian Art and Culture, waiting for her mom to return from their latest archeological trip. Is it any wonder that Aru makes up stories about being royalty, traveling to Paris, and having a chauffeur?

One day, three schoolmates show up at Aru's doorstep to catch her in a lie. They don't believe her claim that the museum's Lamp of Bharata is cursed, and they dare Aru to prove it. Just a quick light, Aru thinks. Then she can get herself out of this mess and never ever fib again.

But lighting the lamp has dire consequences. She unwittingly frees the Sleeper, an ancient demon whose duty it is to awaken the God of Destruction. Her classmates and beloved mother are frozen in time, and it's up to Aru to save them.

The only way to stop the demon is to find the reincarnations of the five legendary Pandava brothers, protagonists of the Hindu epic poem, the Mahabharata, and journey through the Kingdom of Death. But how is one girl in Spider-Man pajamas supposed to do all that?

Reviews:
"[Just] as her heroine learns to wield a bow and arrow, Chokshi has her own weapons: a skill for crackling prose, and a main character who, despite her lies, is both endearingly funny and self-aware....With Aru at the helm, this roller coaster through Hindu culture never feels forced or pedantic, but instead like a new kind of myth — where a hero takes a hammer to the world to shine a light through its cracks."
—New York Times


"In her middle-grade debut, Chokshi spins a fantastical narrative that seamlessly intertwines Hindu cosmology and folklore, feminism, and witty dialogue for an uproarious novel for young readers...Chokshi comes into her own in this novel, reminding readers of the power of language and of stories."
—Kirkus Reviews (starred)


"[Aru Shah and the End of Time] expertly channels the humor and action that have made Riordan's own work so successful...Chokshi weaves an engrossing adventure that will leave readers anticipating the next installment."
—Publisher's Weekly (starred)


"Readers will be delighted by this adventurous dive into Hindu mythology and the chance to cheer along a heroic young protagonist....This series starter also doesn’t skimp on important lessons about friendship, family, and love. Chokshi is a talented writer who breathes fresh air into her mythological world. "
—Booklist


"Using Hindu mythology as the foundation, Chokshi has created an exciting adventure around a coming-of-age tale...An enthralling start to a series that Riordan fans and anyone in the mood for a high-octane adventure will love."
—School Library Journal (starred)


“A new star is born. Aru Shah and the End of Time is mind-bending and brilliant. Original and spellbinding, the story sparkles with wit and magic. Fantasy has never been so much fun.”
—Eoin Colfer, author of the Artemis Fowl series


"Hilarious and brilliant—full of wit, warmth, and wonder. Aru Shah is a clever, believable heroine who deserves her place with all the great heroes of legend. I'm so happy this book exists—and that there are still more to come!"
—Shannon Messenger, author of the Keeper of the Lost Cities series


"Warning! This book contains mind-bending myths, dreadful demons, and more swashbuckling high adventure than can possibly be good for you. Oh, and one of the sassiest heroines ever to walk into an elephant's mouth. I loved it. I think you will, too."
—Jonathan Stroud, author of the Lockwood & Co series


"Welcome to the weird, wonderful, and utterly fierce world of Indian mythology! You have beasts, monsters, demons, magic weapons, and the new-to-the-saving-the-universe heroine Aru Shah who, in the very best traditions of heroic adventure, will have to deal with them all—and with a mentor in the guise of a pigeon called Boo. (Seriously!) Roshani Chokshi has done a brilliant job of capturing the essence of what makes Indian mythology unique, and you’re in for an awesome ride. Cannot wait to find out where she’ll lead us next!"
—Sarwat Chadda, author of the Ash Mistry Chronicles