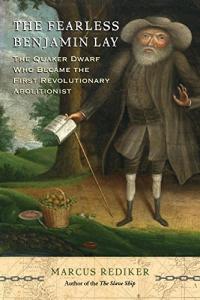 The Fearless Benjamin Lay: The Quaker Dwarf Who Became the First Revolutionary Abolitionist

The little-known story of an eighteenth-century Quaker dwarf who fiercely attacked slavery and imagined a new, more humane way of life.

The Fearless Benjamin Lay chronicles the transatlantic life and times of a singular and astonishing man—a Quaker dwarf who became one of the first ever to demand the total, unconditional emancipation of all enslaved Africans around the world. He performed public guerrilla theater to shame slave masters, insisting that human bondage violated the fundamental principles of Christianity. He wrote a fiery, controversial book against bondage that Benjamin Franklin published in 1738. He lived in a cave, made his own clothes, refused to consume anything produced by slave labor, championed animal rights, and embraced vegetarianism. He acted on his ideals to create a new, practical, revolutionary way of life.


“Rediker provides a valuable addition to abolitionist historiography. . . . A concise, solid biography of ‘the first revolutionary abolitionist,’ a diminutive man who was decades ahead of his time.”
—Kirkus Reviews


"Rediker...successfully rescues Lay from obscurity, arguing that the adventurous, single-minded Quaker was one of the abolition movement's forebears....Rediker adroitly describes the nuances of the Quaker faith's evolution....Lay's farsightedness and extensive advocacy deserve to be remembered."
—Publisher's Weekly


“Admirers of Marcus Rediker’s splendid The Slave Ship will be delighted by this historian’s new book. Sailor, pioneer of guerrilla theater and a man who would stop at nothing to make his fellow human beings share his passionate outrage against slavery, Benjamin Lay has long needed a modern biographer worthy of him, and now he has one.”
—Adam Hochschild


“A modern biography of the radical abolitionist Benjamin Lay has long been overdue. With the sure hand of an eminent historian of the disfranchised, Marcus Rediker has brought to life the wide-ranging activism of this extraordinary Quaker, vegetarian dwarf in a richly crafted book. In fully recovering Lay’s revolutionary abolitionist vision, Rediker reveals its ongoing significance for our world.”
—Manisha Sinha, author of The Slave’s Cause: A History of Abolition


“The unswerving eighteenth-century abolitionist Benjamin Lay, maligned when not ignored for many generations, has at last found his sympathetic biographer. In this captivating, must-read book, Marcus Rediker shows that Lay’s disfigured body contained a mind of steel and a heart overflowing with compassion for victims of the Atlantic slave trade. Lay’s place in the annals of American reform is now secure. If you’re ready to have your mind changed about received wisdom on the eccentric, lonely early abolitionist who blazed the way for later antislavery stalwarts, read this brilliantly researched and passionately written book.”
—Gary Nash, author of Warner Mifflin, Unflinching Quaker Abolitionist