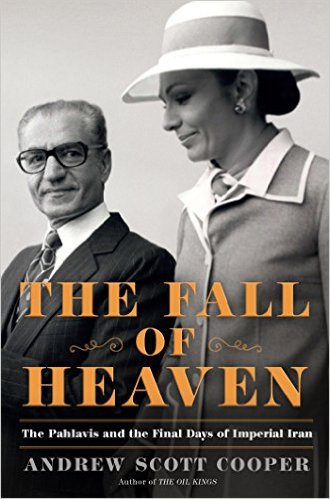 The Fall of Heaven: The Pahlavis and the Final Days of Imperial Iran

An immersive, gripping account of the rise and fall of Iran's glamorous Pahlavi dynasty, written with the cooperation of the late Shah's widow, Empress Farah, Iranian revolutionaries and US officials from the Carter administration.

In this remarkably human portrait of one of the twentieth century's most complicated personalities, Mohammad Reza Pahlavi, Andrew Scott Cooper traces the Shah's life from childhood through his ascension to the throne in 1941. He draws the turbulence of the post-war era during which the Shah survived assassination attempts and coup plots to build a modern, pro-Western state and launch Iran onto the world stage as one of the world's top five powers. Readers get the story of the Shah's political career alongside the story of his courtship and marriage to Farah Diba, who became a power in her own right, the beloved family they created, and an exclusive look at life inside the palace during the Iranian Revolution. Cooper's investigative account ultimately delivers the fall of the Pahlavi dynasty through the eyes of those who were there: leading Iranian revolutionaries; President Jimmy Carter and White House officials; US Ambassador William Sullivan and his staff in the American embassy in Tehran; American families caught up in the drama; even Empress Farah herself, and the rest of the Iranian Imperial family. Intimate and sweeping at once, The Fall of Heaven recreates in stunning detail the dramatic and final days of one of the world's most legendary ruling families, the unseating of which helped set the stage for the current state of the Middle East.

Reviews:
"Engaging...Mr. Cooper's book stands out for his access [to]  partisan contacts--including officials from the Carter White House, Iran's last queen and several of her intimate friends."
—Wall Street Journal


"[The Fall of Heaven] offers a more sympathetic, nuanced portrait of [Mohammad Reza Pahlavi] and the dynasty he was born into. This sober narrative will resonate with many Iranians... As other countries in the Middle East are going through similar transformations and vying for political reform, Cooper reminds us of the ability of power-hungry leaders, capable of manipulating people's desire for change, to build even more brutal and unaccountable systems."
—Washington Post


“A thorough new appraisal of an enigmatic ruler who died believing his people still loved him.”
—Kirkus Reviews (starred)


“Cooper provides an expert and nuanced view of [Mohammad Reza Shah], his regime, and its collapse. This is a fine revisionist study of major world events that continue to influence the fate of the Middle East.”
—Booklist


"Based on various documentary sources as well as impressive access to royalists, revolutionaries, Queen Farah Pahlavi, and various U.S. officials, this thorough work is immensely detailed yet readable and continuously engaging. [Cooper] provides a fascinating, distinctive, and personal account of the Shah and his rule."
—Publisher’s Weekly


"In The Fall of Heaven, Andrew Scott Cooper brings the Shah, along with his colorful retinue and turbulent times, back to life. [The Fall of Heaven is a] thoroughly researched and richly detailed account."
—USA Today


"Andrew Scott Cooper’s The Fall of Heaven takes the reader on a trip to a country that is often misunderstood, culturally, religiously, and many other ways. [The Fall of Heaven] examines the Pahlavis more in depth, shown them with more humanity…The human rights abuses were overblown, the extravagance matched with their generosity and warmth. The Shah was intelligent, religious, but also indecisive, compromising. The world they inhabited would not always be understanding or patient, this would all lead to the inevitable overthrow and discord that still resonates today. A must read for anyone looking to understand Iran."
—Manhattan Book Review