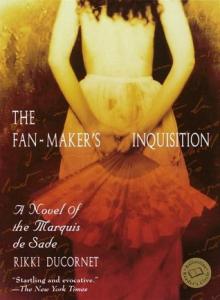 A young fan-maker, who is known throughout France for her sensual, sexually graphic creations, finds herself on trail for her collaboration with the infamous Marquis de Sade. Heads will roll unless the independent fan-maker, erotically cast in the shadow of de Sade, can justify her art and friendships to a court known for its rigid and prudish proprieties.

Reviews:
"Startling and evocative . . . A novelist whose vocabulary sweats with a kind of lyrical heat."
—The New York Times


"A gloriously perfumed novel...sexy, smart, and narcotic...One of the most vigorous celebrations of the imagination, written by an artisan of uncommon talent."
—Los Angeles Times


"A luscious and fiery reverie on sex, art, and the Marquis de Sade... Through her wit and magical language, Ducornet turns the chronicle of an inquisition into irresistible reading."
—Entertainment Weekly