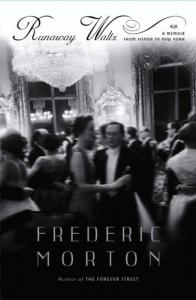 Runaway Waltz: A Memoir From Vienna To New York

One of the most revered essayists and novelists of his generation, Frederic Morton has captured with matchless immediacy the glamour of Vienna before World War I and the storied opulence of the Rothschild family in his bestselling and award-winning works. Now, in his first book in more than fifteen years, he delivers a luminous look at his own unique pursuit of the American dream.

Like many Austrian boys in 1936, the author idolizes Fritz Austerlitz, the Austrian American who went to Hollywood and emerged as Fred Astaire. When his family is forced to flee Vienna, Fritz Mandelbaum becomes Fred Morton and immigrates to New York City. Though he does not learn English until he is sixteen years old, Morton nonetheless goes on to succeed as a writer. The author sets out ten scenes from his pilgrim life and his remarkable road to success: from watching a poorly dubbed Astaire in Vienna to delivering apricot tarts as a baker's assistant in New York; from Salt Lake City where as a young English instructor he met Vladimir Nabokov to a Christmas spent with the Rothschilds at Château Mouton.

Runaway Waltz is a soulful, beautifully written portrait of one man's extraordinary quest for fulfillment and enduring transformation.


“Essays on the stages of his life—boyhood in Vienna, the deracination of flight from Nazism, the trials of assimilation in New York—from one of the renowned practitioners of the form….Genuinely sentimental and stimulating on a generation’s family values.”
—Kirkus Reviews


"Fred Morton has adroitly blended his Viennese boyhood with his American life into a thoroughly delightful memoir."
—A. E. Hotchner, author of Papa Hemingway


“Fred Morton is a national treasure—America’s and Austria’s. In this extraordinary and poignant memoir he delicately waltzes us through a life of wonder: from horror to hope to fulfillment. Beginning in the darkness of civilized Europe's collapse, he leads us step by step—in ten remarkable episodes from Vienna to New York—through one of our time’s great journeys to literary prominence, from German-speaking baker-boy struggling to learn English at age 19, to incomparably graceful writer-observer in his adopted language, rightly honored and celebrated on two continents.”
—Carl Bernstein


“Runaway Waltz is an animated tale of six cities: Vienna and London and New York, and on to Miami, St. Moritz, and Salt Lake City. (Seven, if you count a surprising Christmas at Chateau Mouton with the Rothschilds.) I was entranced by having Frederic Morton as my guide through a tumultuous century, which he chronicles with humor, charm, and verve.”
—Andrew Hacker, author of The End of the American Era


“A compelling memoir. No one has written more effectively about the fascinating—and disjunctive—life of the émigré in America.”
—Bruce Jay Friedman


"This is an elegant and moving story of the coming to America of Frederic Morton, a masterful writer whose Runaway Waltz is a tour de force."
—Gay Talese