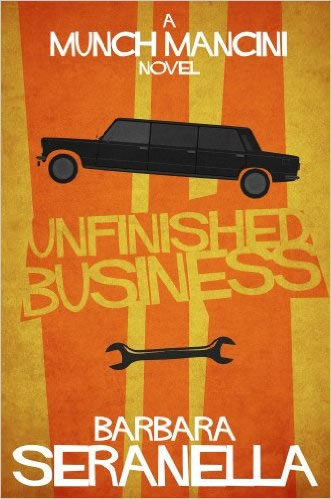 Munch Mancini finally has her life together. A former drug addict and biker who lived rough on the streets, she's now a respectable mom with a regular job. By day, Munch is one of the Brentwood Texaco's best mechanics. By night, she drives a limo. Even better, she owns the limo, and at forty-six bucks an hour, it brings in some nice change.

Like tonight, when the meter metaphorically ticks as she takes in the view outside a cliffside Pacific Palisades mansion while the glamorous types inside drink champagne at a charity gala. Munch sees things while she waits. Two people come out of the house. They argue. Munch senses a threat. Soon one of her customers will be murdered, another will be raped and tortured, and Munch will find herself trapped in the mayhem. She knows something important, perhaps from that night in the Palisades, perhaps from her work at the garage. Whatever it is, it's significant enough for her to become a target.

Munch has much to worry about already. There's her seven-year-old adopted daughter, Asia. Munch would sacrifice anything to keep her safe and secure. There's the current man in her life, Garret Dimond. He's perfect in many ways. She's always prayed for a lover who won't drive her crazy, but she also needs a guy who will keep her awake. Which brings her to Mace St. John, the cop who arrested her back in her biker days. Now they are friends, but Munch sometimes yearns for more. That's impossible. It won't happen. It mustn't. All is tested when they're thrown together in the hunt for a killer.

Vulnerable, courageous, unpredictable, Munch Mancini packs a powerfully entertaining punch in this riveting novel from one of the brightest newstars of crime fiction.


"The writing is crisp, the action fast and furious, the thrills never sag, the book is easy to read and hard to put down."
—Los Angeles Times Book Review