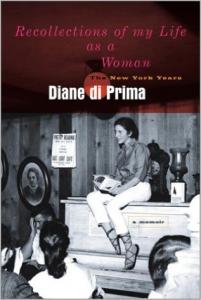 Recollections of my Life as a Woman: The New York Years

In Recollections of My Life as a Woman, Diane di Prima explores the first three decades of her extraordinary life. Born into a conservative Italian American family, di Prima grew up in Brooklyn but broke away from her roots to follow through on a lifelong commitment to become a poet, first made when she was in high school. Immersing herself in Manhattan's early 1950s Bohemia, di Prima quickly emerged as a renowned poet, an influential editor, and a single mother at a time when this was unheard of. Vividly chronicling the intense, creative cauldron of those years, she recounts her revolutionary relationships and sexuality, and how her experimentation led her to define herself as a woman. What emerges is a fascinating narrative about the courage and triumph of the imagination, and how one woman discovered her role in the world.


"Di Prima, perhaps the best known and certainly among the most talented of the beat generation poets, captures the heady atmosphere of New York's avant-garde community in the 1950s and 1960s, while rendering her own life with intimacy and grace...She tells her story well, skillfully interweaving events with lyrical commentary on her inner life."
—Publisher's Weekly


"Poet di Prima chronicled her reign as queen of the Beats in her famously explicit Memoirs of a Beatnik (1968). Here she presents an equally frank self-portrait but on a far grander scale, delving so deeply into her past she transcends the personal to illuminate the primal cultural and psychological issues of the fifties and sixties....di Prima's electrifying perceptions into the nature of sex and love, men and women, art and beauty, drugs and spirituality, and freedom and commitment that keep readers glued to the page."
—Booklist