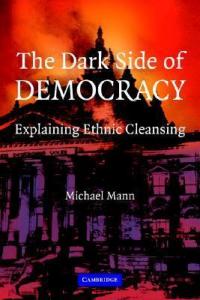 The Dark Side Of Democracy: Explaining Ethnic Cleansing

This comprehensive study of international ethnic cleansing provides in-depth coverage of its occurrences in Armenia, Nazi Germany, Cambodia, Yugoslavia, and Rwanda, as well as cases of lesser violence in early modern Europe and in contemporary India and Indonesia. After presenting a general theory of why serious conflict emerges and how it escalates into mass murder, Michael Mann offers suggestions on how to avoid such escalation in the future. Michael Mann is the author of Fascists (Cambridge, 2004) and The Sources of Social Power (Cambridge 1986).

Reviews:
“Ethnic cleansing is typically seen as the work of primitive evildoers operating outside of modernity. In this important and provocative book, the distinguished sociologist Mann argues that murderous ethnic cleansing is in fact an ugly facet of our modern democratic age-that 'it belongs to our own civilization and to us.'...Mann’s account is not the last word on ethnic cleansing, but it certainly is among the most sophisticated yet.”
—Foreign Affairs


"Michael Mann, one of the great sociological thinkers of our day published two impressive books this year (both from Cambridge University Press)..[in] "The Dark Side of Democracy" he examines the intimate connection between democratization and ethnic cleansing... [and] unlike most sociologists, Mann does not write in jargon. Though certainly dense, these books will reward the effort of any non-scholar willing to tackle them."
—Newsday


"The book is impressive in its historical dimensions."
—Canadian Journal of Sociology Online


"This book, almost encyclopedic in content and rich in descriptive analysis, makes a significant contribution to political sociology and should be required reading for social scientists, political leaders, and policy makers. Essential."
—Choice


"Michael Mann is a purveyor of big ideas, and this big book is full of them, brilliant, powerful, and provocative. Starting from its title, The Dark Side of Democracy launches a debate that will reshape our understanding of the worst of human history in the light of the best, and of the ancient in the light of the modern. Mann combines close empirical insights with a magisterial conceptual grasp. Every page offers points to applaud, dispute, and reflect on. We will be arguing about this work for years, and whatever conclusions we reach will be sharper for it."
—Ben Kiernan, Director, Genocide Studies Program, Yale University


"One of our most distinguished political analysts has turned his attention to the darkest corners of political life, to murderous ethnic conflict. As sketched in this superb book, Mann's account of such cases is timely, provocative - who, for instance, would want to believe that ethnic cleansing bears the imprint of democracy - and ultimately persuasive. A must, if disturbing, read."
—Doug McAdam, Department of Sociology, Stanford University


"Michael Mann's new book is sweeping in its coverage and daring in its argumentation. Its central theme - that murderous ethnic cleansing has accompanied the rise of salvation religion and modern democracy - flies in the face of some broadly held assumptions, namely, that such extreme actions can be explained by recrudescent ancient hatreds or the cynical manipulation of authoritarian elites. Well-researched and compellingly written, this is one of the best recent books on the subject available today."
—Beth A. Simmons, Harvard University


"In a work of great knowledge and forceful argumentation, Michael Mann seeks to provide a general explanation for one of the worst atrocities of the modern era...Mann's knowledge is wide ranging, and aspects of his analysis are illuminating."
—Eric D. Weitz, University of Minnesota


"Mann excels at describing the stages a regime goes through as it descends into ethnic cleansing or mass murder, how an initial plan to privilege one ethnic group over another is twisted and radicalized into the unintended plan 'd' --full scale ethnic murder--and how 'ordinary' citizens are co-opted into endorsing it."
—Rima Berns-McGown, The University of Toronto and the Canadian Institute of International Affairs