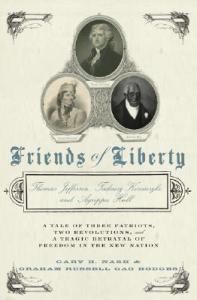 Friends Of Liberty: A Tale Of Three Patriots, Two Revolutions, And The Betrayal That Divided A Nation: Thomas Jefferson, Thaddeus Kosciuszko, And Agrippa Hull

Friends of Liberty tells the remarkable story of three men whose lives were braided together by issues of liberty and race that fueled revolutions across two continents. Thomas Jefferson wrote the founding documents of the United States. Thaddeus Kosciuszko was a hero of the American Revolution and later led a spectacular but failed uprising in Poland, his homeland. Agrippa Hull, a freeborn black New Englander, volunteered at eighteen to join the Continental Army. During the Revolution, Hull served Kosciuszko as an orderly, and the two became fast friends. Kosciuszko's abhorrence of bondage shaped histhinking about the oppression in his own land. When Kosciuszko returned to America in the 1790s, bearing the wounds of his own failed revolution, he and Jefferson forged an intense friendship based on their shared dreams for the global expansion of human freedom. They sealed their bond with a blood compact whereby Jefferson would liberate his slaves upon Kosciuszko's death. But Jefferson died without fulfilling the promise he had made to Kosciuszko—and to a fledgling nation founded on the principle of liberty and justice for all.

Reviews:
"[A] wonderful book, an outstanding example of how a scholarly monograph can be readable, moving and sobering all at once."
—Publisher's Weekly, starred


"A vivid and moving account of the remarkable interaction between three historically fascinating individuals: Thomas Jefferson, Tadeusz Kosciuszko, and Agrippa Hull. It also provides a surprisingly disappointing perspective on Jefferson's failure to deliver on the pledge to Kosciuszko to free the Virginian's slaves with Kosciuszko's bequest entrusted to his great American friend."
—Zbigniew Brzezinski, author of Second Chance and Counselor and Trustee at the Center for Strategic and International Studies


"At the intersection of three remarkable lives, Gary Nash and Graham Hodges have pieced together an extraordinary tale of heroism and tragedy, trust and betrayal. Friends of Liberty is telling history with deep meaning for anyone interested in the burning question of slavery and race in the early American Republic."
—Ira Berlin, Distinguished University Professor of History, University of Maryland, and author of The Making of African America


"By interweaving three lives of the American Revolution, Nash and Hodges offer a fascinating account of that era from the 'top down' and 'bottom up,' and make clear the way the struggle for independence unleashed radical hopes yet failed to solve the gravest contradiction in American life, the coexistence of slavery and freedom."
—Eric Foner, DeWitt Clinton Professor of History at Columbia University, and author of The Story of American Freedom and Reconstruction: America's Unfinished Revolution


"Revolutionary fervor, patriotism, and heroism are not limited to one particular race, class, or nation. After reading Nash and Hodges's account of the intersecting lives and ideas of Jefferson, Kosciuszko, and Hull, it is difficult to believe that anyone could have ever thought they were. This is a dazzling account of three colorful figures whose lives are emblematic of all the many-colored threads that run through the American tapestry, and whose lives were devoted to the service of the ideals that founded our nation."
—Henry Louis Gates, Jr., Alphonse Fletcher University Professor, Harvard University


"Using the lives of people as seemingly disparate as a president of the United States, a Polish hero of revolutions on two continents and a free black man in America to frame their story, Gary Nash and Graham Hodges have fashioned a fast-paced, informative narrative that sheds fresh light on the complicated issues of slavery, serfdom and basic human rights during the first generation of America's national existence. The linchpin in this triumvirate was the Pole Tadeusz Kosciuszko whose enlightened relationship with his black orderly, Agrippa Hull, and close friendship with Thomas Jefferson allows the authors to move skillfully between such varied discussions as explaining the black experience in colonial and Revolutionary America, the slavery issue in the early American republic, serfdom in Poland, and the meaningful relationship between Kosciuszko and Jefferson that has been heretofore neglected by the latter's biographers. In the process, they illuminate the origins and arguments of the early anti-slavery organizations in America, provide a detailed account of the life of Agrippa Hull, and a masterly treatment of the seeming of Jefferson's personal struggle with the slavery issue. Focusing, as they do, on the issues of freedom and liberty, Nash and Hodges provide through they eyes of the three protagonists the varied perspectives so often missing from traditional political histories. Their book should make for excellent reading for scholars and classrooms alike."
—James S. Pula, author of Tadeusz Kosciuszko: The Purest Son of Liberty, and Professor of History at Purdue University


"With the energy, adventure, and rich prose of a picaresque novel, Friends of Liberty explores a deep politics of race that shaped the early American nation. Nash and Hodges have written an honest, painful, and gloriously good book about `Founding Fathers.'"
—Marcus Rediker, author of The Slave Ship: A Human History