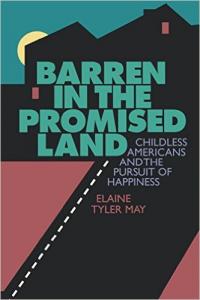 Barren In The Promised Land: Childless Americans and the Pursuit of Happiness

Chronicling astonishing shifts in public attitudes toward reproduction, from the association of barrenness with sin in colonial times, to the creation of laws for compulsory sterilization in the early twentieth century, from the baby craze of the 1950s, to the rise in voluntary childlessness in the 1990s, to the increasing reliance on startling reproductive technologies today, Elaine Tyler May reveals the intersection between public life and the most private part of our lives—sexuality, procreation, and family.

Reviews:
"'Do we want children?' This major question has only recently been asked in our society. As Elaine May, professor of American studies at the University of Minnesota, points out in this well-thought-out analysis, childbearing was an economic necessity until this century....May takes readers through the shifts in opinion over the centuries, from barren women being perceived as witches to childfree women being accused of hedonism and self-indulgence; from pregnancy as a life-threatening state to designer genes and contemporary couples unwilling to accept the prospect of no children. She doesn't take sides but places the available information at the disposal of her readers."
—Publisher's Weekly


"This book examines reproduction as a tool of political and social control from Colonial times to the present.... May, a social historian, uses historical sources and responses to an author's query to illustrate changing attitudes toward childlessness. Unlike Susan S. Lang's Women Without Children, which deals only with the psychological aspects, this book places childlessness within a social and historical context, providing an added dimension. An interesting addition to women's studies and social science collections."
—Library Journal


"Combining their stories of nonreproduction with that of America's reproductive history, May's discussion of our country's reproductive trends is a cohesive picture of a place where children were, at first, an economic necessity.... A fecund view of every aspect of childlessness, including sterility, infertility, and 'designer genes' in a country that has moved from sex without children to children without sex."
—Booklist


"May documents a continuing American obsession with reproduction and shows how this public embrace of childbearing has inflicted anguish on childless women across the centuries."
—New York Times Book Review


"Through rich anecdotes from the past and the testimonies of more than 500 contemporary Americans who do not have children, [May] creates a compelling portrait of the growing isolation of the childless."
—Ms. Magazine


"The first major historical study of childlessness in the United States...[Barren in the Promised Land] provides an intriguing analysis of shifts in public attitudes and values toward parenthood, while surveying developments in reproductive interventions. Most important, this engaging book establishes the importance of the changing practices and meanings of childbearing and fertility for American history."
—Journal of American History


"[I]t is in her analysis of the new cultural divide between the child-seekers and the child-free that May is most interesting...Having carried out extensive archive research when describing childlessness in past centuries, May based her study of the 1990s on correspondence from 500 men and women who answered her request for personal testimony...[which] lend[s] an otherwise fact-laden tome the vivid colours of oral history."
—New Statesman