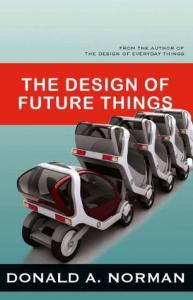 The Design of Future Things

In The Design of Future Things, best-selling author Donald A. Norman presents a revealing examination of smart technology, from smooth-talking GPS units to cantankerous refrigerators. Exploring the links between design and human psychology, he offers a consumer-oriented theory of natural human-machine interaction that can be put into practice by the engineers and industrial designers of tomorrow's thinking machines. A fascinating look at the perils and promise of the intelligent objects of the future, The Design of Future Things is a must-read for anyone interested in the dawn of a new era in technology.


“[Don Norman is] the maestro of gizmos since publishing The Design of Everyday Things….”
—New York Times

“Life is supposed to get easier with new technology. Donald Norman wishes it were so…. The culprit: bad design, a longtime target of the Northwestern University Professor.”
—Time

“…written with wit, authority and the pragmatic, everyman touch that propboably made Norman so good at his job in the first place.”
—BBC Focus Magazine

“…Norman brings together such a broad range of research and insight into a reasonably unified structure, all written and packaged to be accessible to a general audience.”
—Interactions magazine

“This book, like its predecessor, will disabuse anyone of the notion that a book about engineering has to be dull. Don Norman’s delightful humor, inviting prose and choice of topics and examples are guaranteed to make a connection with anyone who has ever driven a car, used a microwave oven or searched for hidden treasures in a refrigerator.”
—Dallas Morning News, review by Fred Bortz

“If anyone knows a thing or two about designing for human-computer interaction, it’s Don Norman.”
—CNET News.com