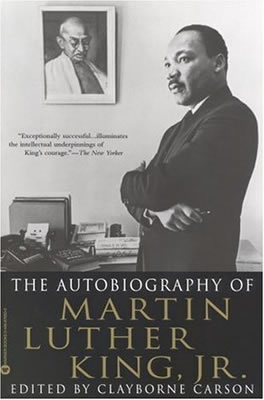 Using Stanford University's voluminous collection of archival material, including previously unpublished writings, interviews, recordings, and correspondence, King scholar Clayborne Carson has constructed a remarkable first-person account of Dr. King's extraordinary life. Beginning with his boyhood, the book portrays King's education as a minister, his ascendancy as a leader of the Montgomery bus boycott, his pivotal role in the civil rights demonstrations in Washington, D.C., and his complex relationship with the Kennedy brothers, LBJ, Malcolm X, and numerous other leading figures of the day.

Reviews:
"This compilation offers a concise first-person account of [Martin Luther King Jr.'s] life from his birth in Atlanta in 1929 to his awakening social consciousness and discovery of the teachings of Mahatma Gandhi. [The Autobiography of Martin Luther King Jr.] offers glimpses of King's family life as well a view of famous Americans such as Stokely Carmichael, Malcolm X and JFK. But what is most evident throughout Carson's study is the moral courage that sustained King and allowed him to inspire a largely peaceful mass movement against segregation in the face of bloody reprisals.
—Publisher’s Weekly


"Carson threads together what King wrote or said at various times, creating an eloquent and expressive narrative that moves from the early years to the unfulfilled dreams of the slain Civil Rights leader."
—Library Journal