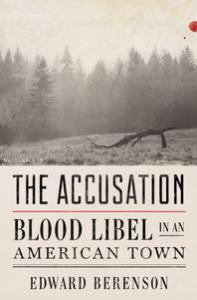 The Accusation: Blood Libel in an American Town

A fascinating investigation of America’s only alleged case of blood libel, and what it reveals about anti-Semitism in the United States and Europe.

On Saturday, September 22, 1928, Barbara Griffith, age 4, strayed into the woods surrounding the upstate village of Massena, New York. Hundreds of people looked everywhere for the child but could not find her; several hours into the search, someone suggested that Barbara had been kidnapped and killed by Jews. The mayor and local police believed the rumor, and suddenly the allegation of ritual murder, known to Jews as “blood libel,” took hold. Rational people in government and Jewish leaders had to intervene to restore calm once Barbara was found safe and sound.
That so many embraced the accusation seems bizarre at first glance— blood libel was essentially unknown in the United States— but a great many of Massena’s inhabitants, Christians and Jews alike, had emigrated recently from Central and Eastern Europe, where it was all too common. The Accusation is a shocking and perceptive cross- cultural exploration of American and European responses to anti- Semitism.

• One of four books featured in the "Briefly Noted" section of The New Yorker.

"Berenson’s skill in this eye-opening and timely book includes weaving into this local story the larger history of the European blood libel."
—Howard Cooper, The Jewish Chronicle

"The Accusation, which is as frightening in its own way as prime Stephen King, is not just about the blood libel, but also a brief history of the Jewish experience in America."
—The Daily Beast

"The book offers a gripping tale of a community of immigrants and foreign workers dealing with fear and xenophobia while the country is in the throes of a heated election season... The Accusation acts as a reminder of the danger of making claims about a people from a place of resentment, fear or xenophobia."
—The Jerusalem Post

“Berenson’s surfacing of this mostly forgotten, shameful story serves as a warning about intolerant public rhetoric and its consequences.”
—Booklist

"Berenson’s achievement in "The Accusation" is to contextualize the Massena blood libel in multiple provocative ways. Berenson offers a concise history of the origins of the blood libel in Europe, as well as its modern recurrences."
—Julia M. Klein, Forward

"Berenson is at his best when breaking down the complex factors that had an effect on, and were affected by, this single known blood libel allegation in the U.S."
—NPR

"Berenson’s book reminds us that what seems inconceivable is nonetheless possible."
—Judith Shulevitz, The New York Times, journalist, critic, and author of The Sabbath World: Glimpses of a Different Order of Time

“A strange and riveting story of anti-Semitism in an era not far removed from our own….An excellent work of scholarly detection, especially timely in an age when the immigrant ‘other’ is under constant suspicion.”
—Kirkus Reviews

“Edward Berenson’s meticulous, intricate history of the European roots of ‘blood libel’ anti-Semitism — and the single time a small American town fell into its thrall — is a stellar example of the universal importance of historical research. THE ACCUSATION isn’t just the story of Barbara Griffiths’ disappearance, and the unfounded claim that shook the small Jewish community in Massena, New York — more importantly, it’s the story of how it happened, and how it could happen again.”
—Rebecca Schuman, author of Schadenfreude: A Love Story

"NYU history professor Berenson (Europe in the Modern World: A New Narrative History Since 1500) provides a comprehensive look at a little-known episode of American anti-Semitism in this thoughtful history... Readers interested in the recurrence of anti-Semitism in the U.S. will find food for thought here.
—Publisher's Weekly

"In an improbable age when chants from Charlottesville, “Jews will not replace us!” and synagogue shootings in Pittsburgh and San Diego, evoke darker times of anti-Semitic violence, THE ACCUSATION is a frightful reminder that even in the United States, when the conditions are right, it can happen here.  A wonderful and important book that, given current events, leaves its final chapter still unwritten."
—Thane Rosenbaum, author of The Myth of Moral Justice: Why Our Legal System Fails to Do What’s Right

“A blood libel in twentieth-century America? In an ordinary American town? In his astonishing study of this tainted fable, Edward Berenson, a distinguished historian with family roots in Massena, New York, uncovers the reason we ought not to be astonished: the blood libel is the lie that never dies. In its multiple mercurial guises, and in the latest headlines, it lives on. The Accusation is not mere history. It is news.”
—Cynthia Ozick, author of Foreign Bodies

“An extraordinary - and timely - story expertly told.  Edward Berenson, a distinguished historian of modern Europe, opens up a side of early twentieth-century American history that feels both startling and eerily familiar in its mix of ethnocentrism and political toxicity.  A lucid, deeply intelligent, and important book.”
—Steven J. Zipperstein, author of Pogrom: Kishinev and the Tilt of History

”This model of micro-history illuminates both the persistence and inconsistency of antisemitism in Western culture through the unlikely prism of an almost forgotten event in a backwater American town during the presidential election of 1928.  Berenson’s research ranges widely over time and space, and his narrative deftly blends scholarly generalizations with nitty-gritty historical reconstruction.  The highly readable result is a tour de force of insight and synthesis.”
—Peter Hayes, author of "WHY? Explaining the Holocaust"

“The Accusation starts with what amounted to an obscure footnote in regional narratives and a minor curiosity in studies of American Jewish history, and builds upon it a very large, important story. In a richly woven tapestry, Edward Berenson examines the many strands that link early twentieth-century Massena, New York, to the Middle Ages, when Jews found themselves accused of using the blood of young Christians to bake matzah, their ritual Passover bread. Deftly connects the very local to the national and to the global.”
—Hasia R. Diner, Paul S. and Sylvia Steinberg Professor of American Jewish History, New York University