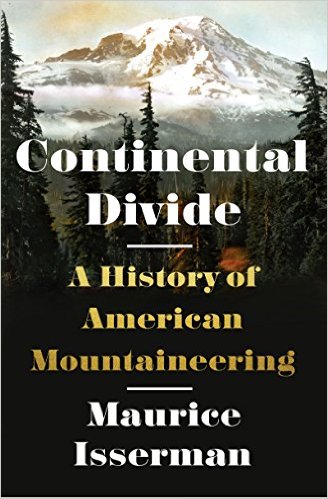 Mountains have had an outsized impact on American identity: the Rockies and Tetons pulled us westward toward Manifest Destiny; the Catskills and Appalachians stirred the transcendentalists; and Yosemite inspired the early environmental conservationists. Continental Divide tells this gripping history through four centuries of landmark climbs and thrilling first ascents.

With an incredible cast--including Lewis and Clark, Thoreau and Emerson, John Muir and Teddy Roosevelt, Jack Kerouac and Gary Snyder, Tom Hornbein and Willi Unsoeld--Continental Divide explores the rivalries that developed between daring, upstart climbers from the West, especially the Sierra Club, and their more traditional, upper-class eastern counterparts. Describing epic campaigns from Mt. Washington to Denali, Maurice Isserman traces the evolving social, cultural, and political roles mountains played in shaping the country, and he describes how American mountaineers forged a brotherhood of the rope, modeled on Americas unique democratic self-image.


“Isserman's comprehensive and inviting book celebrates the growth in popularity of hiking and mountaineering even as it mourns the loss of intimacy and the sense of community shared by earlier outdoor adventurers and organizations. He reminds us that, even in our sedentary time and suburban outlook, we are lured to mountain heights -- drawn there in the hope that the trek will bring us 'strength, purpose, unity, salvation.' We go, too, to test ourselves and to test the notion that it is not only the destination but also the journey that rewards us.”
—Wall Street Journal

“[W]ide-ranging history…Isserman’s narrative takes us through four centuries of American climbing with a view to the intellectual and social forces that changed our attitudes to altitude…No one who enjoys the outdoors will fail to find suspense and enlightenment in this chronicle of the enterprising and sometimes foolhardy people who opened Americans’ eyes to the rigors and rewards which can be found in the world’s highest places.”
—Natural History Magazine

“Isserman brings the same wide-ranging insight and engaging prose style to [Continental Divide]. The result is an account both educational and, perhaps surprisingly, thrilling.”
—Booklist

“Isserman brings masterly storytelling and an eye for detail to the history of American mountaineering…Isserman’s deft use of resources, archives, and firsthand accounts make this a wonderful gem of a work that readers can mine for inspiration. This broad sweep of American mountaineering history will satisfy general history readers and outdoor adventurers alike.”
—Library Journal (starred)

“Isserman brings…diverse stories together in a cohesive narrative with a strong combination of in-depth research and welcoming prose that even a novice can understand…[H]is passionate scholarship … [produces] an easily accessible account of the exploration, subjugation, conservation, and appreciation of the great peaks of the U.S. and the world.”
—Publishers Weekly

“With Continental Divide, Isserman chronicles 350 years of mountaineering milestones, and heralds many a hearty hero. But his real purpose is more sentimental: he wants to understand how we, as Americans, fell about all that rock and rubble. Americans have always had a relationship with mountains, he tells us, and it’s changed from one era to the next. It’s changing still…Throughout Continental Divide, Isserman emphasizes at every stage the emotional pull of mountains, an innate attraction that modernity cannot diminish.”
—Mazamas