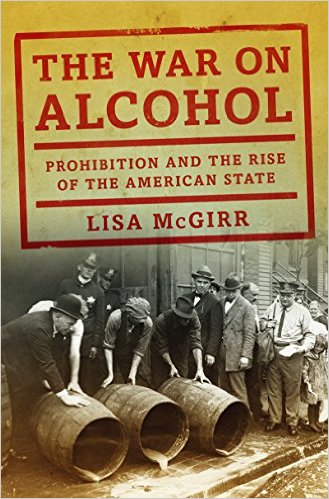 The War on Alcohol: Prohibition and the Rise of the American State

Prohibition has long been portrayed as a "noble experiment" that failed, a newsreel story of glamorous gangsters, flappers, and speakeasies. Now at last Lisa McGirr dismantles this cherished myth to reveal a much more significant history. Prohibition was the seedbed for a pivotal expansion of the federal government, the genesis of our contemporary penal state. Her deeply researched, eye-opening account uncovers patterns of enforcement still familiar today: the war on alcohol was waged disproportionately in African American, immigrant, and poor white communities. Alongside Jim Crow and other discriminatory laws, Prohibition brought coercion into everyday life and even into private homes. Its targets coalesced into an electoral base of urban, working-class voters that propelled FDR to the White House.

This outstanding history also reveals a new genome for the activist American state, one that shows the DNA of the right as well as the left. It was Herbert Hoover who built the extensive penal apparatus used by the federal government to combat the crime spawned by Prohibition. The subsequent federal wars on crime, on drugs, and on terror all display the inheritances of the war on alcohol. McGirr shows the powerful American state to be a bipartisan creation, a legacy not only of the New Deal and the Great Society but also of Prohibition and its progeny.

The War on Alcohol is history at its best--original, authoritative, and illuminating of our past and its continuing presence today.

Reviews:
“[A] fine history of prohibition… McGirr makes major contributions to the historical record [and] could have a major impact on how we read American political history. Our present-day nativists would do well to heed McGirr’s meticulous reconstruction of a time in which oppressed people fought back and helped build a coalition that dominated American politics for 40 years.”
—New York Times Sunday Book Review


“McGirr’s well-written and accessible volume is essential because she not only recounts familiar aspects of Prohibition with insight and verve--she clearly, cogently and persuasively connects that era’s politics and policies to our contemporary Prohibition: America’s decades-long “War on Drugs.” […] McGirr’s book [is] a great history of broader American politics, one that connects to contemporary issues in a profound way. Perhaps books like McGirr's will teach Americans to repeat the liberating logic of repeal.”
—Chicago Tribune


“A provocative thesis...the lesson in prohibition is not that every grand crusade is a mistake; it’s that, from zero feet away, it can be difficult to tell the difference between an idea as bad as the Eighteenth Amendment and one as good as the Nineteenth Amendment—or, as the example of Gerrit Smith illustrates, the Thirteenth.”
—New Yorker


“McGirr shifts our attention from gangsters and flappers to policemen and agency chiefs in order to explain the critical role of Prohibition in the creation of the modern American state. McGirr picks up where [histories of temperance often stop], exploring the daunting political problems and personal casualties that came with trying to enforce this strange new law. With her emphasis on the American “state,’ McGirr steps into what has become one of the most fruitful, if sprawling, areas of inquiry in academic political history.”
—The Nation


“Important…persuasive…Ms. McGirr’s book points to the wisdom of Prohibition’s repeal—and rightly calls on us to step back from the counterproductive policies of our own time.”
—Wall Street Journal


“A focused and thought-provoking book.”
—Economist


“Both sobering and enlightening, McGirr’s work gives Prohibition and its consequences a much-needed reexamination that provides insights relevant to today’s War on Drugs.”
—Publisher’s Weekly


“In this splendid social and political history, McGirr offers a vivid account of Prohibition and its ‘significant but largely unacknowledged’ long-term effects on the United States…An important book that warrants a place at the forefront of Prohibition histories. General readers will love it, and scholars will find much to ponder.”
—Kirkus Reviews (starred)


"McGirr's book is both remarkably precise and breathtakingly sweeping. Attending to class, race, ethnicity, and gender, and incorporating everything from ward politics to federal commissions, women's work to African American newspapers, The War on Alcohol effortlessly pieces together a groundbreaking history of prohibition."
—Journal of American History