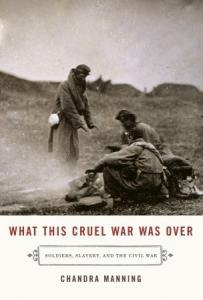 What This Cruel War Was Over: Soldiers, Slavery, and the Civil War

A vivid, unprecedented account of why Union and Confederate soldiers identified slavery as the root of the war, how the conflict changed troops’ ideas about slavery, and what those changing ideas meant for the war and the nation.

Using soldiers’ letters, diaries, and regimental newspapers, Chandra Manning allows us to accompany soldiers—black and white, northern and southern—into camps and hospitals and on marches and battlefields to better understand their thoughts about what they were doing and why. Manning’s work reveals that Union soldiers, though evincing little sympathy for abolitionism before the war, were calling for emancipation by the second half of 1861, ahead of civilians, political leaders, and officers, and a full year before the Emancipation Proclamation. She recognizes Confederate soldiers’ primary focus on their own families, and explores how their beliefs about abolition—that it would endanger their loved ones, erase the privileges of white manhood, and destroy the very fabric of southern society—motivated even non-slaveholding Confederates to fight and compelled them to persevere through military catastrophes like Gettysburg and Atlanta, long after they grew to despise the Confederate government and disdain the southern citizenry. She makes clear that while white Union troops viewed preservation of the Union as essential to the legacy of the Revolution, over the course of the war many also came to think that in order to gain God’s favor, they and other white northerners must confront the racial prejudices that made them complicit in the sin of slavery. We see how the eventual consideration of the enlistment of black soldiers by the Confederacy eliminated any reason for many Confederate soldiers to fight; how, by 1865, black Union soldiers believed the forward racial strides made during the war would continue; and how white Union troops’ commitment to racial change, fluctuating with the progress of the war, created undreamt-of potential for change but failed to fulfill it.

An important and eye-opening addition to our understanding of the Civil War.


-Winner of Avery O. Craven Award given by the Organization of American Historians for best book on any aspect of antebellum, Civil War, or Reconstruction history.

-Lincoln Prize Honorable Mention, given by the Gilder Lehrman Institute and the Lincoln and Soldiers Institute of Gettysburg College for best book on Lincoln or the Civil War.

-Named one of Best Books of 2007 by Chicago Tribune

-Finalist for Frederick Douglass Award for best book on any aspect of slavery, abolition, or resistance to slavery worldwide.


“…an engagingly written, convincingly argued social history with a point – that those who did the fighting in the Union and Confederate armies 'plainly identified slavery as the root of the Civil War.'”
—Publishers Weekly (starred)


“Researched with unfailing energy and written with clarity and passion, Chandra Manning’s What This Cruel War Was Over is a major contribution to the never-ending battle over what the Civil War was all about.”
—Leonard L. Richards, author of The California Gold Rush and the Coming of the Civil War


“In this striking book, Chandra Manning demonstrates conclusively that Union and Confederate soldiers perceived slavery and emancipation as central to the meaning of the Civil War.”
—James M. McPherson, author of Battle Cry of Freedom: The Civil War Era


“Deeply researched and powerfully written, Chandra Manning’s stunning book…is a treasure map of the meaning of the Civil War to those who fought it.”
—Adam Rothman, editor of Slave Country: American Expansion and the Origins of the Deep South


“Because of Professor Manning’s achievement it will be impossible in the future for anyone to downplay the importance of slavery and race for those who fought the war.”
—William Cooper, author of Jefferson Davis, American


“A pleasure to read, with a graceful narrative and compelling analysis grounded in prodigious research.”
—Aaron Sheehan Dean, author of The View from the Ground: Experiences of Civil War Soldiers