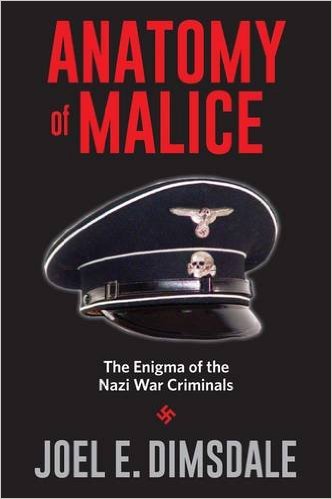 Anatomy of Malice: The Enigma of the Nazi War Criminals

When the ashes had settled after World War II and the Allies convened an international war crimes trial in Nuremberg, a psychiatrist, Douglas Kelley, and a psychologist, Gustave Gilbert, tried to fathom the psychology of the Nazi leaders, using extensive psychiatric interviews, IQ tests, and Rorschach inkblot tests. Never before or since has there been such a detailed study of governmental leaders who orchestrated mass killings.

Before the war crimes trial began, it was self-evident to most people that the Nazi leaders were demonic maniacs. But when the interviews and psychological tests were completed, the answer was no longer so clear. The findings were so disconcerting that portions of the data were hidden away for decades and the research became a topic for vituperative disputes. Gilbert thought that the war criminals malice stemmed from depraved psychopathology. Kelley viewed them as morally flawed, ordinary men who were creatures of their environment. Who was right?

Drawing on his decades of experience as a psychiatrist and the dramatic advances within psychiatry, psychology, and neuroscience since Nuremberg, Joel E. Dimsdale looks anew at the findings and examines in detail four of the war criminals, Robert Ley, Hermann Gring, Julius Streicher, and Rudolf Hess. Using increasingly precise diagnostic tools, he discovers a remarkably broad spectrum of pathology. Anatomy of Malice takes us on a complex and troubling quest to make sense of the most extreme evil.


“Thoughtful…an overview of the minds of Nazi leaders, the differing views of the doctors who examined them, and psychology’s possible contribution to explicating the causes of evil.”
—New York Times Book Review


“Joel Dimsdale, equipped with the tools of modern psychiatry, psychology, and neuroscience, takes a fresh look at the unsettling findings in his new book.”
—San Diego Jewish World


“Anatomy of Malice [is] an extraordinary book that seeks to understand and explain the perpetrators of the Holocaust by revisiting the clinical notes of two doctors, psychiatrist Douglas Kelley and psychologist Gustave Gilbert…deeply well informed, drawing expertly on both science and the arts, but it is neither simple nor assured.”
—Jewish Journal


"[Anatomy of Malice] is a fascinating and informative compendium of details and little-known tidbits relayed with flair."
—Jerusalem Post


“Dimsdale, equipped with the tools of modern psychiatry, psychology and neuroscience—takes a fresh look at the unsettling findings in Anatomy of Malice.”
—Times of San Diego


“In this fascinating and compelling journey into the depraved minds of some of the Nazi leaders, a respected scientist who has long studied the Holocaust asks probing questions about the nature of malice.  I could not put this book down.”
—Thomas Wise, Inova Fairfax Hospital


"This harrowing tale and detective story asks whether the Nazi War Criminals were fundamentally like other people, or fundamentally different. Compelling and well told, it reexamines a historical period we must never forget, and its central question is at the heart of what it is to be human."
— T.M. Luhrmann, author of When God Talks Back


“A masterful and rigorous portrayal of the trial of the Nazi war criminals. Superbly written and meticulously researched, this is a riveting narrative of the trial, the Nazi criminals, and the psychologist who analyzed them.”
—Irvin Yalom, Stanford University


“Exciting, provocative, and surprising, this compelling book explores the diverse personalities that contributed to the evil of the Nazi regime.  Collecting and integrating their stories, Dimsdale explores the frequently unsolved challenges of psychiatric and psychological assessments and the role of the assessor.”
— Winfried Rief, University of Marburg, Germany