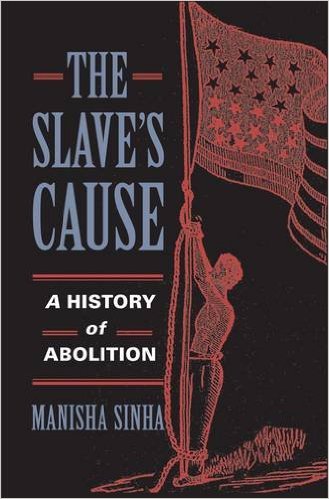 The Slave's Cause: A History of Abolition

Received historical wisdom casts abolitionists as bourgeois, mostly white reformers burdened by racial paternalism and economic conservatism. Manisha Sinha overturns this image, broadening her scope beyond the antebellum period usually associated with abolitionism and recasting it as a radical social movement in which men and women, black and white, free and enslaved found common ground in causes ranging from feminism and utopian socialism to anti-imperialism and efforts to defend the rights of labor. Drawing on extensive archival research, including newly discovered letters and pamphlets, Sinha documents the influence of the Haitian Revolution and the centrality of slave resistance in shaping the ideology and tactics of abolition. This book is a comprehensive new history of the abolition movement in a transnational context. It illustrates how the abolitionist vision ultimately linked the slaves cause to the struggle to redefine American democracy and human rights across the globe.


•Winner of the 2017 Frederick Douglass Book Prize
•Winner of the 2017 James A. Rawley Award for  best book on secession or the sectional crisis, presented by the Southern Historical Association
•2016 Longlist for the National Book Award for Nonfiction
•Recipient of the 2017 Avery Craven Prize for the best book in the Civil War era, by the Organization of American Historians
•Recipient of the 2016 SHEAR Best Book Prize
•Honorable mention in the US History section of the PROSE awards
•Selected as "Editors' Choice" in the New York Times Sunday Book Review


“[The Slave’s Cause] is an encyclopedic survey of the movement against slavery in the United States. It is difficult to imagine a more comprehensive history of the abolitionist movement. Sinha’s work is also a biographical dictionary, naming practically every individual and group that struck a blow against slavery...She has given us a full history of the men and women who truly made us free. And that is more than enough.”
—Ira Berlin for the New York Times Sunday Book Review


“With The Slave’s Cause, Manisha Sinha… joins [the company of some of our most gifted and perceptive historians.] Despite the large historiography in which it is embedded, The Slave’s Cause takes its place as a starting point for anyone interested in the history of abolitionism. Her claims…are large, as are their implication. Foremost, perhaps, is her insistence on the significance of black actors in the ‘slave’s cause.’ This argument is by no means new…but no one has made the case as fully as has Sinha. ”
—Steven Hahn for The Chronicle of Higher Education

“[The Slave’s Cause is a] comprehensive and often revelatory history of American abolitionism. Lucidly written, compellingly argued and based on exhaustive scholarship, The Slave’s Cause captures the myriad aspects of this diverse and far-ranging movement and will deservedly take its place alongside the equally magisterial works of Ira Berlin on slavery and Eric Foner on the Reconstruction Era.”
—Wall Street Journal


"The movement gets the big, bold history it deserves, [The Slave’s Cause is] a stunning new history of abolitionism by Manisha Sinha."
— Adam Rothman for The Atlantic


“This book is not for the faint of heart. [There are] several important motifs that add up to a comprehensive interpretation of the abolitionist movement. A significant contribution of Sinha’s book is its emphasis on the crucial part that black abolitionists played in the movement. [Another] is the contribution to abolitionism of slave resistance. Sinha is on firm ground in her emphasis on another type of resistance, running away. [Sinha] has cemented in place the last stone in the scholarly edifice of the past half-century that has rehabilitated the abolitionists’ reputation.”
—James McPherson for New York Review of Books

"The long history of the fight to end slavery is brilliantly told in historian Sinha's magisterial, The Slave's Cause. [This book] deserves a wide readership amongst the students of American history."
—The Providence Journal

"A powerfully unfamiliar look at the struggle to end slavery in the United States, The Slave's Cause is as multifaceted as the movement it chronicles."
—Matthew Price for Boston Globe


“[The Slave’s Cause] invites us to take a fresh look at the entire story. It’s an extraordinary story, which asks the reader to re-evaluate the very nature of abolition on both sides of the Atlantic… It is shaped by historical imagination and anchored in extensive research, and will oblige future scholars to rethink the very nature of abolition itself."
—James Walvin for BBC History Magazine


“A comprehensive survey of the abolitionist movement in Colonial and independent America, [The Slave’s Cause is] wide-ranging and admirably ambitious, to be read alongside Hugh Thomas’ The Slave Trade (1997) and Eric Foner’s The Fiery Trial (2010).”
—Kirkus Reviews


“In emphasizing abolitionism’s long historical trajectory, its international perspective, and its interracial character, Sinha situates her story firmly within the most up-to-date trends in historical writing; and with her extensive research and broad command of the era, she has produced a work of high originality and broad popular appeal.”
—Eric Foner, Pulitzer Prize-winning author of The Fiery Trial: Abraham Lincoln and American Slavery


“A groundbreaking, brilliant book. The Slave’s Cause should be required reading for every scholar in the humanities and social sciences who is concerned with the American condition. Its that important. No one does a better job describing how and why male and female, black and white abolitionists created the first civil rights movement.”
—John Stauffer, Harvard University


"A long book, but well worth the investment. I read nearly everything published on the subject, but I still learned something new in every chapter."
—Stephen L. Carter for Bloomberg.com