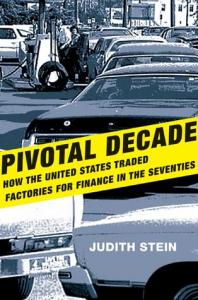 Pivotal Decade: How The United States Traded Factories For Finance In The Seventies

In this fascinating new history, Judith Stein argues that in order to understand our current economic crisis we need to look back to the 1970s and the end of the age of the factory—the era of postwar liberalism, created by the New Deal, whose practices, high wages, and regulated capital produced both robust economic growth and greater income equality. When high oil prices and economic competition from Japan and Germany battered the American economy, new policies—both international and domestic—became necessary. But war was waged against inflation, rather than against unemployment, and the government promoted a balanced budget instead of growth. This, says Stein, marked the beginning of the age of finance and subsequent deregulation, free trade, low taxation, and weak unions that has fostered inequality and now the worst recession in sixty years.

Drawing on extensive archival research and covering the economic, intellectual, political, and labor history of the decade, Stein provides a wealth of information on the 1970s. She also shows that to restore prosperity today, America needs a new model: more factories and fewer financial houses.

Reviews:
"Here is one of those rare books in which a seasoned historian offers compelling analyses of urgent contemporary importance. Pivotal Decade will startle and provoke you.  It is on my not-miss list."
—Sean Wilentz, Princeton University


"In this probing, economically literate analysis, Judith Stein explains how and why the 1970s became the only 20th century decade other than that of the Great Depression during which Americans ended up poorer than they began. By explaining how we got to an economy that subordinates the manufacture of stuff to one that trades, finances, and consumes it, Stein provides the fullest story of the way economic stagnation prepared the way for a new era of social inequality. Citizens of Obama's America should take note."
—Nelson Lichtenstein, author of The Retail Revolution: How Wal-mart Created a Brave New World of Business


"Americans perplexed by the use of defective Chinese steel to rebuild the iconic San Francisco Bay Bridge will find an explanation for their puzzlement in Judith Stein's Pivotal Decade: How the United States Traded  Factories for Finance in the Seventies. Bringing together political and economic history in the context of American foreign policy, Stein shows how Americans allowed the allure of paper profits to undermine our economic underpinnings."
—Fred Siegel, The Cooper Union for Science and Art


"Judith Stein gets it. Pivotal Decade's illustration and examination of the last forty years of failed economic policy will be a powerful text for our generation as well as for the future. We must learn these lessons once and for all?before it's too late."
—Leo W. Gerard, president, United Steelworkers