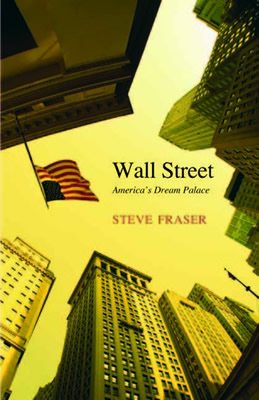 Wall Street: no other place on earth is so singularly identified with money and the power of money. And no other American institution has inspired such deep moral, cultural, and political ambivalence. Is the Street an unbreachable bulwark defending commercial order? Or is it a center of mad ambition?

This book recounts the colorful history of America’s love-hate relationship with Wall Street. Steve Fraser frames his fascinating analysis around the roles of four iconic Wall Street types—the aristocrat, the confidence man, the hero, and the immoralist—all recurring figures who yield surprising insights about how the nation has wrestled, and still wrestles, with fundamental questions of wealth and work, democracy and elitism, greed and salvation. Spanning the years from the first Wall Street panic of 1792 to the dot.com bubble-and-bust and Enron scandals of our own time, the book is full of stories and portraits of such larger-than-life figures as J. P. Morgan, Cornelius Vanderbilt, and Michael Milken. Fraser considers the conflicting attitudes of ordinary Americans toward the Street and concludes with a brief rumination on the recent notion of Wall Street as a haven for Everyman.

Reviews:
“In this age of agitated amnesiacs, Americans have forgotten that nothing is new—that in other times money and power were forged into a conspiracy against the public. Steve Fraser connects vividly to that past, reminding us that this present financial crisis is not the first time our hearts have been broken by Wall Street peddlers of the American Dream.”
—Bill Moyers


"This book is written with Fraser’s customary panache and scrupulous attention to detail. If you’re after a fascinating take on one of our ultimate icons, this is it.”
—Mike Wallace, John Jay College (CUNY), co-author of Gotham: A History of New York City to 1898


"Provides a rich historical context from which to reflect on the purpose and morality of our financial markets."
—Robert Shiller, author of Irrational Exuberance


"I don't know of a better book about Wall Street's hold on the American imagination. Were it to be listed as a stock on the New York exchange, I'd bet on the quadrupling of its price in the first day's trading."
—Lewis Lapham


"In his delightfully written, sweeping history Wall Street, [Fraser] shows how . . . citizens react to the ups and downs of the business cycles and the towering figures who dominated each era."
—Toronto Globe & Mail


"Fraser is almost lyrical as he weaves together his tale of how the image of Wall Street fits into American culture and mythology."
—Library Journal