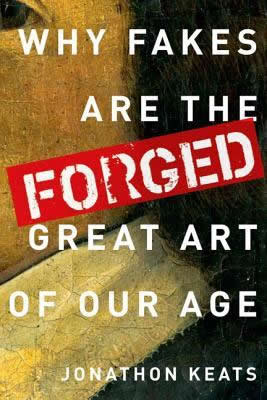 Forged: Why Fakes are the Great Art of our Age

According to Vasari, the young Michelangelo often borrowed drawings of past masters, which he copied, returning his imitations to the owners and keeping originals. Half a millennium later, Andy Warhol made a game of "forging" the Mona Lisa, questioning the entire concept of originality.

Forged explores art forgery from ancient times to the present. In chapters combining lively biography with insightful art criticism, Jonathon Keats profiles individual art forgers and connects their stories to broader themes about the role of forgeries in society. From the Renaissance master Andrea del Sarto who faked a Raphael masterpiece at the request of his Medici patrons, to the Vermeer counterfeiter Han van Meegeren who duped the avaricious Hermann Goring, to the frustrated British artist Eric Hebborn, who began forging to expose the ignorance of experts, art forgers have challenged "legitimate" art in their own time, breaching accepted practices and upsetting the status quo. They have also provocatively confronted many of the present-day cultural anxieties that are major themes in the arts. Keats uncovers what forgeries--and our reactions to them--reveal about changing conceptions of creativity, identity, authorship, integrity, authenticity, success, and how we assign value to works of art. The book concludes by looking at how artists today have appropriated many aspects of forgery through such practices as street-art stenciling and share-and-share-alike licensing, and how these open-source "copyleft" strategies have the potential to make legitimate art meaningful again.

Forgery has been much discussed--and decried--as a crime. Forged is the first book to assess great forgeries as high art in their own right.


"For some time and in a wide variety of media, Jonathon Keats has been revealing himself to be one of the most witty, penetrating and deeply contemplative minds of this young century. In careful and skeptical depth, his work searches and researches the unrevealed truths that lie behind many things we take for granted. In this bold, typically irreverent work, Keats asks a basic and impertinent question: Can any legitimate artwork match the public impact and significance of a scandalous forgery? Whatever we decide, in the end we are aware that we've been in the midst of that rarest of presences these days: a wholly original mind capable of expressing itself with clarity, precision and humor."
—Stanley Bing, columnist,Fortune Magazine


"Jonathon Keats's playfully learned volume is not only a history of modern art-faking but also a philosophical investigation of creativity and repetition in our era. It won't tell you how to forge, but it may convince you that you should."
—John Dorfman, editor-in-chief, Art & Antiques


"According to Jonathon Keats, 'Forgers are the foremost artists of our age.' To which I might add, 'Keats's new book is about to become the foremost text on the compelling world of fakes and forgeries."
—Richard Polsky, author of The Art Prophets and I Bought Andy Warhol