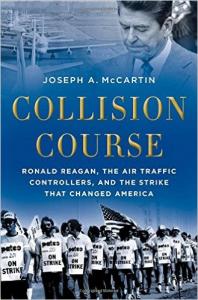 On August 3, 1981, the Professional Air Traffic Controllers Organization, representing 12,000 federal employees, called an illegal strike. Ronald Reagan, president for less than seven months, fired the strikers, establishing a reputation for prompt resolution, not to mention hostility toward organized labor. But as Joseph A. McCartin writes, the PATCO strike was much more than a single, turning-point labor dispute. It was the culmination years of high-stakes conflict, recurrent airline disasters, and the tragic struggles of individual air traffic controllers whose actions repeatedly saved lives, but who could not save their union. The fall of PATCO not only ushered in a long period of labor decline, but served as a harbinger for the current campaign against public sector unions that now roils American politics.

In Collision Course, McCartin sets the PATCO strike within a vivid panorama of the rise and near fall of the world's busiest air-traffic control system. He begins with an arresting account of the mid-air collision over Park Slope, Brooklyn, on December 16, 1960, that cost 134 lives and disillusioned controllers. Through the stories of controllers like Mike Rock and Jack Maher, who were galvanized into action by the Brooklyn disaster and went on to found PATCO, McCartin describes the intense camaraderie, professionalism, and ambition of those who sought to make the airways safer and their jobs less stressful while at the same time pushing their way into the middle class. Collision Course tells a story of escalating confrontation, political intrigue, and post-1960s generational conflict. Most of all, it tells the story of Reagan and the controllers, whose surprising courtship in the 1980 election led PATCO to endorse the Republican on the promise that he would address controllers' grievances. That brief fateful alliance triggered devastating miscalculations that changed the course of history, establishing patterns that still govern America's labor politics.

Gripping, incisive, written with an eye for detail and a grasp of the vast consequences of PATCO conflict for both air travel and America's working class, Collision Course is a stunning achievement.

Reviews:
"Simply one of the best-written labor histories I have ever read."
—Working USA: The Journal of Labor and Society


"Mr. McCartin deals with policy but also with personalities, and the book is better for it. For anyone at all interested in labor or business history, I recommend it."
—The New York Times


"[C]onvincing...draws a vivid picture of a culture and how, as much as the realities an organization faces, that culture can determine the group's behavior."
—The Philadelphia Inquirer


"[McCartin] patiently lays out the full background and aftermath of the PATCO tragedy in Collision Course, an absorbing, detailed and shrewdly observed chronicle of the strike and PATCO's unlikely rise and fall."
—The Nation


"The definitive account of the PATCO strike...Collision Course's treatment of worker and political power should help inform trade unions' strategies today, and perhaps prompt discussion of how to revitalize the greatest source of worker power: the strike."
—In These Times


"The air traffic controllers' strike in August 1981 was a defining moment for the Reagan presidency and the American labor movement. By firing the air traffic controllers, and successfully replacing them, Reagan heralded the end of a political era when labor unions - and the workers they represented - were an integral part of the American social contract. Joseph McCartin tells the story in gripping detail. It's must reading for anyone interested in the recent history of American politics and labor relations."
—John B. Judis, author of The Folly of Empire


"The signal event in the evisceration of the American middle class was Ronald Reagan's breaking the air traffic controllers' strike in 1981. In Collision Course, Joe McCartin brilliantly and compellingly tells this tragic tale, and situates it in the broader narrative of middle-class America's long and sickening decline."
—Harold Meyerson, Editor-at-Large of The American Prospect and op-ed columnist for The Washington Post


"In an age of obscurantist academic historical writing, Collision Course stands out as a model of accessible and relevant scholarship."
—National Review


"The Air Traffic Controllers strike of 1981 was one of the most important struggles in American history, and by breaking the union, Ronald Reagan dealt a blow to organized labor from which it has still not recovered. If you care about the labor movement, you need to read Collision Course and even if you don't, you'll be transfixed by the drama of McCartin's story-telling."
—E.J. Dionne, syndicated columnist and author of Why Americans Hate Politics


"McCartin tells the story of PATCO before its inception to years after the conclusion of the strike, a fascinating story with many twists and turns."
—Contemporary Sociology