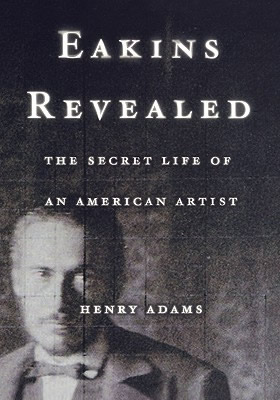 Eakins Revealed: The Secret Life of an American Artist

Thomas Eakins is widely considered one of the great American painters, an artist whose uncompromising realism helped move American art from the Victorian era into the modern age. He is also acclaimed as a paragon of integrity, one who stood up for his artistic beliefs even when they brought him personal and professional difficulty--as when he was fired from the Pennsylvania Academy of Art for removing a model's loincloth in a drawing class.

Yet beneath the surface of Eakins's pictures is a sense of brooding unease and latent violence--a discomfort voiced by one of his sitters who said his portrait "decapitated" her. In Eakins Revealed, art historian Henry Adams examines the dark side of Eakins's life and work, in a startling new biography that will change our understanding of this American icon. Based on close study of Eakins's work and new research in the Bregler papers, a major collection never fully mined by scholars, this volume shows Eakins was not merely uncompromising, but harsh and brutal both in his personal life and in his painting. Adams uncovers the bitter personal feuds and family tragedies surrounding Eakins--his mother died insane and his niece committed suicide amid allegations that Eakins had seduced her--and documents the artist's tendency toward psychological abuse and sexual harassment of those around him.

This provocative book not only unveils new facts about Eakins's life; more important, it makes sense, for the first time, of the enigmas of his work. Eakins Revealed promises to be a controversial biography that will attract readers inside and outside the art world, and fascinate anyone concerned with the mystery of artistic genius.

Reviews:
“In this engrossing and definitive book by Henry Adams, readers are given a full view of Thomas Eakins, both in his public life and in his deeply layered private life….This book will no doubt prove to be an invaluable treasure for all who love the subject.”
—The Bloomsbury Review


“Who was Thomas Eakins? Was he a heroic figure, a paragon of artistic integrity whose paintings of oarsmen, swimmers, family members and the distinguished citizens of Philadelphia expressed America's emerging power in the 19th century? Or was he, as the art historian Henry Adams depicts him in a new biography, a tormented soul, afraid of going insane like his mother, sexually ambivalent, a bully, an exhibitionist, a voyeur who was possibly guilty of bestiality and of incest with female relatives? "Eakins Revealed" (Oxford University Press), by Mr. Adams, a professor at Case Western Reserve University in Cleveland, is roiling art historians.”
—The New York Times

“This new biography of Thomas Eakins may impact our understanding of the artist the way Fawn Brodie's biography of Thomas Jefferson changed our view of the author of the Declaration of Independence. It's no longer possible to see Eakins as a simple American hero or to ignore the dark shadows that shaped his life.”
—Art News


“Adams…[has] a fresh take that he works out with rigor and care…illuminating.”
—Publishers Weekly


“With a wealth of fresh documentation and the page-turning momentum of a detective story, Henry Adams has uncovered the Gothic world of Eakins's private and public biography, a scandalous mixture of insanity, incest, suicide, and exhibitionism.  But more important, he has woven this sinister story into new and deeper readings of Eakins's work, creating a seamless interpretation of how life is transformed into art.”
—â€‹Robert Rosenblum