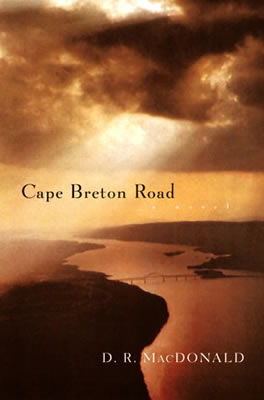 This is the story of Innis Corbett, a young man born in Cape Breton, Nova Scotia, into a Highlander community whose inhabitants are held by ties of memory and blood. As a child Innis went with his parents to live in Boston. After his father was killed in a car accident, Innis was raised by his mother, a woman with a weakness for men and drink. When Innis gets into trouble over a series of car thefts, he is deported back to Canada, a fate worse than prison, in his eyes. Innis ends up living with his Uncle Starr amidst the harshly beautiful landscape that has shaped his family and that both absorbs and challenges him. He takes refuge in the wild, dense woods, where he devises a plan to grow marijuana. This venture relieves his loneliness and gives him something to care for, a secret of his own. Then Claire, an attractive former flight attendant nearing 40, enters the Starr household. So begins an entanglement that leads to suspicion, jealousy, and ultimately to violence. Cape Breton Road is an exceptional novel by a writer with an unerring eye for landscape and tragedy that is bred in the bone.

Reviews:
“With its perfect sentences, its engraver's portrait of this little-known enclave in North America, and its remarkable penetration of the troubled inner life of young Innis Corbett, it is that rarest of novels, one so vivid, so fully imagined that its reality overtakes your own during the time you are reading. Eros and crime and the inscrutability of a secluded people combine to lend a tantalizing atmosphere of cool suspense…. This is a flat-out great book.”
—Scott Turow


“Magnificent and long overdue. The storm clouds mount between nephew and uncle with the inevitability and steadily rising stakes of classical tragedy, and when they burst, the climax is like one of Shakespeare’s catastrophes. This is a mature work, aged in the cask, of a writer who has spent a lifetime studying his craft. Cape Breton Road is bold, complex, yet as nearly flawless as they come-- a golden novel, worth its weight.”
—The Toronto Star


“Lovely…MacDonald knows this landscape inside and out, and his love of the place is palpable. Cape Breton itself is the novel’s North Star.”
—Boston Globe


“Remain[s] grounded in the everyday while indulging in stylistic richness.”
—San Francisco Chronicle