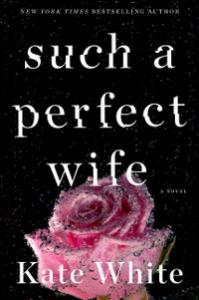 Such A Perfect Wife

Must be blonde, green-eyed, and a good Catholic girl…

Wife and mother of two, Shannon Blaine was strikingly pretty with gorgeous blonde hair and dazzling green-eyes. Just a couple of weeks shy from her 34th birthday, she went for a morning jog in her neighborhood of Lake George, New York, and disappeared. The residents in the idyllic lakeside town, popular with summer tourists, are stunned. Wasting no time, Shannon’s sister organizes search parties with the police. Though no one says the words, everyone is hoping they aren’t too late and can’t help fearing the worst.

Bailey Weggins, now working for the online magazine Crimebeat, is on assignment covering Shannon’s disappearance. It’s a small town, so naturally she wonders if the person responsible is someone close to Shannon: her distraught husband…her bitter sister…a creepy hotel owner who watched her run every morning…the priest who is evasive to Bailey’s questioning.

When an anonymous caller reaches out to Bailey and gives her the cryptic clue that Shannon was a “good Catholic girl,” the tip eventually leads Bailey to Shannon and a grisly discovery. As she soon learns, Shannon’s case isn’t an isolated incident. The killer had targeted young blonde women in the area about a decade before, leaving each of them with stigmata markings. The questions abound. Why has the serial killer chosen this particular calling card and what is the religious significance behind the murders? Other than the similarities in appearance, why were these women targeted? And most disturbing of all, why has this psychopath decided to resume the slayings after so many years?

When another reporter who is similary following the Shannon Blaine story is murdered, Baily is in a desperate race against time as she goes on the hunt to track down a serial killer, who always seems to be one step ahead...

Reviews:
“I started reading Such a Perfect Wife (Harper) late on a Sunday night, and boy was that a bad idea. The end of each chapter left cliffhanger after cliffhanger until I was losing sleep from racing through the book. . . . Such a Perfect Wife is a truly new spin on a classic woman-gone-missing story that is refreshingly personal and plot-driven.”
—BookTrib

"Mystery fans’ apprehension will skyrocket, as the compelling plot, with multiple suspects, thunders to a conclusion...One of the stronger entries in an always-entertaining series."
—Michele Leber, Booklist Review