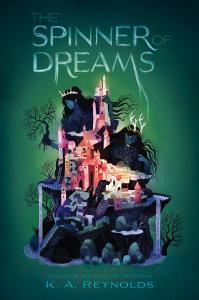 The Spinner of Dreams

Cursed at birth by the devious Fate Spinner, Annalise has always lived a solitary life with her loving parents. She does her best to ignore the cruel townsfolk of her desolate town—but the black mark on her hand won’t be ignored. Not when the monster living within it, which seems to have an agenda of its own, grows more unpredictable each day.

There’s only one way for Annalise to rid herself of her curse: to enter the Labyrinth of Fate and Dreams and defeat the Fate Spinner. So despite her anxiety, Annalise sets out to undo the curse that’s defined her—and to show the world, and herself, exactly who she is inside.

Inventive, empathetic, and strange in all the best ways, The Spinner of Dreams draws from the author’s own experiences to create a story that feels timeless and universal. As she did in her debut The Land of Yesterday, K.A. Reynolds thoughtfully explores mental health and crafts an adventure that fits right alongside middle grade classics like The Phantom Tollbooth.

Reviews:
“A magnificent and fantastical journey expertly woven with magic, imagination, and hope. Reynolds gently draws the reader to a place where fragile dreams are realized, where broken hearts are made whole. Readers will be utterly captivated.”
—J.C. Cervantes, New York Times bestselling author of The Storm Runner