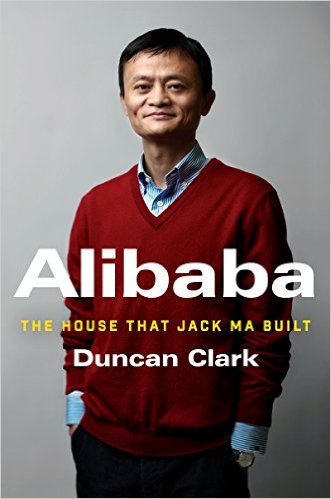 An engrossing, insider's account of how a teacher built one of the world's most valuable companies--rivaling Walmart & Amazon--and forever reshaped the global economy.

In just a decade and half Jack Ma, a man from modest beginnings who started out as an English teacher, founded and built Alibaba into one of the world's largest companies, an e-commerce empire on which hundreds of millions of Chinese consumers depend. Alibaba's $25 billion IPO in 2014 was the largest global IPO ever. A Rockefeller of his age who is courted by CEOs and Presidents around the world, Jack is an icon for China's booming private sector and the gatekeeper to hundreds of millions of middle class consumers.

Duncan Clark first met Jack in 1999 in the small apartment where Jack founded Alibaba. Granted unprecedented access to a wealth of new material including exclusive interviews, Clark draws on his own experience as an early advisor to Alibaba and two decades in China chronicling the Internet's impact on the country to create an authoritative, compelling narrative account of Alibaba's rise.

How did Jack overcome his humble origins and early failures to achieve massive success with Alibaba? How did he outsmart rival entrepreneurs from China and Silicon Valley? Can Alibaba maintain its 80% market share? As it forges ahead into finance and entertainment, are there limits to Alibaba's ambitions? How does the Chinese government view its rise? Will Alibaba expand further overseas, including in the U.S.?

Clark tells Alibaba's tale in the context of China's momentous economic and social changes, illuminating an unlikely corporate titan as never before.

Reviews:
"I recommend [Alibaba.] It tells a lot not just about Ma and his sprawling, remarkable Alibaba firm but also about the potential, the limits, and the character of modern China."
—James Fallows for The Atlantic


"Not since John Rockefeller has a businessman defined a country’s transformation as well as Jack Ma does…Alibaba is now one of the world’s biggest internet companies. It utterly dominates e-commerce in China, and has also made inroads into internet finance, cloud computing and logistics…How did a poor boy who barely scraped into a teacher’s college manage this? Duncan Clark, an expert on China’s technology sector, explains in a fascinating new book: Mr. Ma ‘stands at the intersection of China’s newfound cults of consumerism and entrepreneurship."
—The Economist


"The story of Alibaba’s rise—along with Jack Ma’s—offers a fascinating window onto China’s staggering transformation. Duncan Clark tells the story with flair in Alibaba: The House that Jack Ma Built.…Mr. Clark is a fine writer, and his main character is, well, quite a character…But if Alibaba: The House that Jack Ma Built is a good yarn, its greatest value lies in what it says about today’s China. You can read the daily journalism and academic reporting, but it’s another thing to watch a fledgling 35-year-old entrepreneur hunt desperately for investors and then captain the largest –ever Wall Street IPO 15 years later."
—The Wall Street Journal


"Having met Ma in 1999, [Clark] recalls the former English lecturer's remarkably ambitious spirit and his intentions to overthrow the giants of Silicon Valley with the development of an unrivaled Internet-based business. [Clark] draws on his 20-year tenure living and working in China, and he shows the great impact of the multifaceted online experience on the country's financial and cultural climates… The author frequently highlights Ma's quirky, often contrarian personality and risk-taking management style. A particularly vigorous chapter on the struggle between Alibaba and e-commerce titans eBay and Yahoo for profitability and marketplace saturation in China dramatically demonstrates the volatility and competitiveness between businesses seeking to harness Internet consumerism. Useful, business-minded reporting on an unconventional corporate magnate, containing both corporate and human-interest perspectives."
—Kirkus Reviews


"As an advisor to Alibaba in the early years, Clark (chairman, investment advisory firm BDA China) is qualified to provide riveting stories about Ma, including his becoming a Tai Chi master to his role in boardroom spats. The study will appeal to those interested in business, China, ecommerce, and readers who are curious about the vibrant personality behind one of the world’s greatest success stories. VERDICT: This absorbing and well-written portrayal of Ma’s character, and his role in Alibaba’s development will appeal to a wide range of readers."
—Library Journal


"A must-read for anyone who wants to understand the present China and the heartbeat of a great entrepreneur."
—Tim Draper


"This book provides excellent insight into the world of Jack Ma... Duncan Clark is a real China ‘Old Hand,’ unique in his knowledge of the Jack Ma generation. This book is definitely in the short list for those who wish to understand the Chinese economy today."
—Ken Jacobs, Chairman Emeritus, Silicon Valley Banks