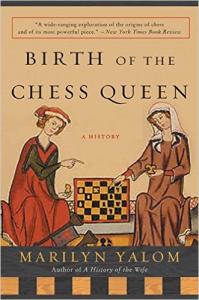 Birth of the Chess Queen: A History

Everyone knows that the queen is the most powerful piece in chess, but few people know that the game existed for five hundred years without her. In India, Persia, and the Arab lands, where the game was first played, a general, or vizier (chief counselor to the king), occupied the square where the queen now stands. Not until the year 1000, two hundred years after Arab conquerors brought chess to southern Europe, did a chess queen appear on the board. Initially she was the weakest piece, moving only one square at a time on the diagonal, yet by 1497, during the reign of Isabella of Castile, the chess queen had become the formidable force she is today.

How and why did this transformation take place? Birth of the Chess Queen examines the five-hundred-year period between the chess queen's timid emergence and her elevation into the game's mightiest piece. Marilyn Yalom, inspired by a handful of surviving medieval chess queens, traces their origin and spread from Spain, Italy, Germany, France, and England to Scandinavia and Russia. In a lively and engaging narrative, Yalom draws parallels between the birth of the chess queen and the ascent of female sovereigns in Europe, presenting a layered, fascinating history of medieval courts, with their intrigues and internal struggles for power. Further, she shows the connection between the chess queen, the cult of the Virgin Mary, and the cult of Romantic Love, all of which influenced European society for centuries to come.

Illustrated with beautiful art throughout, this book takes a fresh look at the politics and culture of medieval Europe, the institution of queenship, and the reflections of royal power in the figure of the chess queen.

Reviews:
“Chess, as any devoted reader of the novels of Vladimir Nabokov knows, is a superb metaphor for life. Now, as it turns out, and as Marilyn Yalom illustrates in a fascinating book, the metaphor works the other way as well. In "Birth of the Chess Queen," Yalom, a senior scholar at the Institute for Women and Gender at Stanford and the author of "A History of the Wife" and "A History of the Breast," has written the rare book that illuminates something that has always been dimly perceived but never articulated, in this case that the power of the chess queen reflects the evolution of female power in the Western world.”
— San Francisco Chronicle


“Marilyn Yalom, a senior scholar at Stanford University’s Institute for Women and Gender, is also the author of A History of the Wife, and A History of the Breast. While researching the latter, she came across a small, 14th-century ivory figure of a Madonna and nursing Jesus that was referred to as a “Chess Queen.” Her efforts to determine whether that figurine actually was a chess piece led to a wider investigation into the chess queen itself. What she discovered was that among chess royalty, a woman’s place originally was at home and not on the board. And that only after noblewomen fought their way to power and respect did chess cease to be an all-man’s world.”
— Philadelphia Inquirer


“It was one of the oddest coups d’etat in history, and nobody knows exactly how, or when, it happened. For centuries, the king was dominant. Then the queen surpassed him and has ruled the field ever since. It’s a flat and bloodless field: 64 squares on a small board, two contestants with 16 pieces each. The battle is chess, and cultural historian Marilyn Yalom set out with her new book, “Birth of the Chess Queen,” to solve a mystery: How was it that sometime between the years 990 and 1497 the feminine monarch replaced the king as the center of power? [Yalom] . . . tries to trace the rise to prominence of the only female monarch on the board.”
— Boston Globe


“Chess was invented in India in the fifth century and was spread by Islamic conquests to Europe, where the piece known as the vizier became the queen—the only female in the all-male club of chess pieces. Yalom makes a credible, though circumstantial, case that this rise reflects the power intermittently accorded to, or seized by, female European monarchs. It was in the late tenth century, during the regency of Empress Adelaide, that the vizier underwent his sex change. Five hundred years later, in Queen Isabella’s Spain, the queen was transformed from a timid lady mincing one diagonal step at a time into what one shocked Italian bishop called a ‘bellicose virago.’ But there’s a sting at the end of this feminist historical fable: the queen’s supremacy made the game so much faster and more competitive that it was considered unsuitable for upper-class women.”
— The New Yorker


“‘She is an awesome warrior who can move in any direction – forward, backward, to the right, to the left, and diagonally – one space at a time or across the entire board,’ writes Marilyn Yalom in Birth of the Chess Queen (HarperCollins, $24.95). But the queen did not always evince such power and flexibility. Indeed, she was a late insertion into the greatest of board games: In India and other regions where chess originated, all the pieces started out male. How the piece once known as the vizier to the king underwent a sex change is the subject of this foray into chess history.”
— The Washington Post


“In ‘Birth of the Chess Queen’ a wide-ranging exploration of the origins of chess and of its most powerful piece – the queen – the Stanford gender scholar Marilyn Yalom, author of ‘A History of the Wife,’ ‘A History of the Breast’ and other record-correctors, has rattled the vaults of Europe to shake out the missing-link chess pieces that show the game’s evolution on the Continent…she traces the rise and spread of female power and prestige across Europe in the Middle Ages…Yalom’s entertaining (and credible) contention is that the booting of the vizier and the coronation of the queen are linked to the rising status of women in medieval Europe.”
— New York Times Review of Books


“Yalom (A History of the Wife) has written a fascinating cultural account of the evolution of a game piece….This anecdote-filled book should appeal not only to readers interested in chess but to anyone with an interest in cultural diffusion or gender studies.”
— Library Journal


“How did a game that originated in India in the sixth century evolve to feature a game piece that now has iconic stature in modern Western culture? Both chess fans and those unfamiliar with the game will enjoy this absorbing look at the evolution of chess and the rise in power and stature of the chess queen in the last 500 years.”
—Booklist


“Yalom, author of cultural histories of the breast and the wife, writes passionately and accessibly about this esoteric topic. She follows the chess queen’s appearance and development, twining together royal history and chess history. . . .  an enticing portal into the past.”
— Los Angeles Times Book Review


“Yalom introduces readers to significant queens, empresses and countesses as she traces the spread of chess across Europe. With anecdotes, art, legends and literature, she shows how the chess queen became ‘the quintessential metaphor for  female power in the Western world.’ Yalom offers an outstanding glimpse at chess as a courting ritual…Yalom presents an entertaining and enlightening survey that offers a new perspective on an ancient game.”
—Publishers Weekly


“A brief history of chess from its birth in fifth-century India to its 20th century adult ubiquity with a quick study of gender relations through the ages and slim biographies of powerful women in Asia and Europe whose eminence may have been so profound as to effect the evolution of the chess queen from stay-home spouse to aggressive warrior. Yalom provides fine photographs of the oldest queens in captivity, showing how the piece has acquired both stature and individuality…Yalom makes an appealing case, especially in her association of the game with the courtly love tradition and the cult of the virgin Mary.”
—Kirkus Reviews