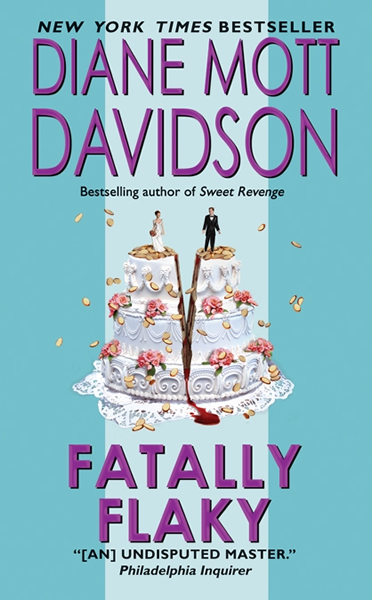 It's been a long, rainy summer for Goldy Schulz, who is engaged in planning wedding receptions for what seems to be all of Aspen Meadow. It's bad enough that Billie Attenborough, the bride from hell, has changed her menu six times and the event date twice. Now she wants to move the location to the Gold Gulch Spa just a scant two days before tying the knot to her doctor fianc. Then Doc Finn, beloved local physician and the best friend of Goldy's godfather, Jack, is killed when his car tumbles into a ravine. At least that's what appears to have happened. But Jack thinks Doc was murdered because of the research he was doing at the spaallegations that are confirmed when Jack himself is attacked.

So Goldy dons chef's whites and goes undercover at the spa, where coffee is outlawed in favor of calming smoothies, and the fruit cocktail doesn't include fresh fruit. Add in the obstreperous owner, who years ago tried to sabotage Goldy's fledgling business, and she's got her hands full.

Above all, there seems to be a clever killer on the spa grounds, watching her every move. After what befell Jack, Goldy knows that she might be next. Catering weddings, and cooking low-fat food, could be killing herliterally.