Kristina Rizga has been writing about youth and student issues for over a decade, most recently as an education reporter for Mother Jones. Her writing has been published in The Nation, The American Prospect, and Global Post, among other publications. Prior to Mother Jones, Rizga was the executive editor of WireTap, an award-winning political magazine for young adults. She is also co-founder and reporter at the Baltic Center for Investigative Journalism, based in her homeland, Latvia. She lives with her husband Mike Stern in San Francisco. 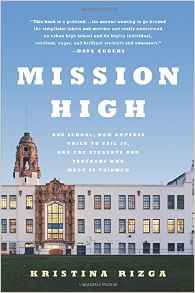 Mission High: One School, How Experts Tried to Fail It, and the Students and Teachers Who Made It Triumph