Born in New York City, Sue Bender received her BA from Simmons College and her MA from the Harvard University School of Education. She taught high school in New York and English at the Berlitz School in Switzerland. She later earned a Masters in Social Work from the University of California at Berkeley. During her active years as a family therapist, Bender was founder and Director of CHOICE: The Institute of the Middle Years. In addition to being an author and former therapist, Sue Bender is a ceramic artist and much sought after lecturer nationwide.

Profiles and interviews with Ms. Bender, as well as book excerpts have been published in countless national publications including Reader's Digest, The Washington Post, Ladies' Home Journal, The Chicago Tribune, The Utne Reader, and W Magazine. She has also appeared as a guest on dozens of radio and television shows.

She lives in Berkeley, California with her husband Richard, and is the mother of two grown sons. 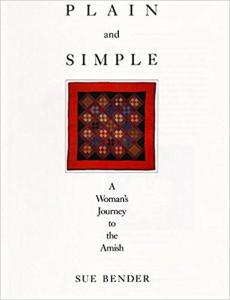 Plain and Simple: A Journey to the Amish